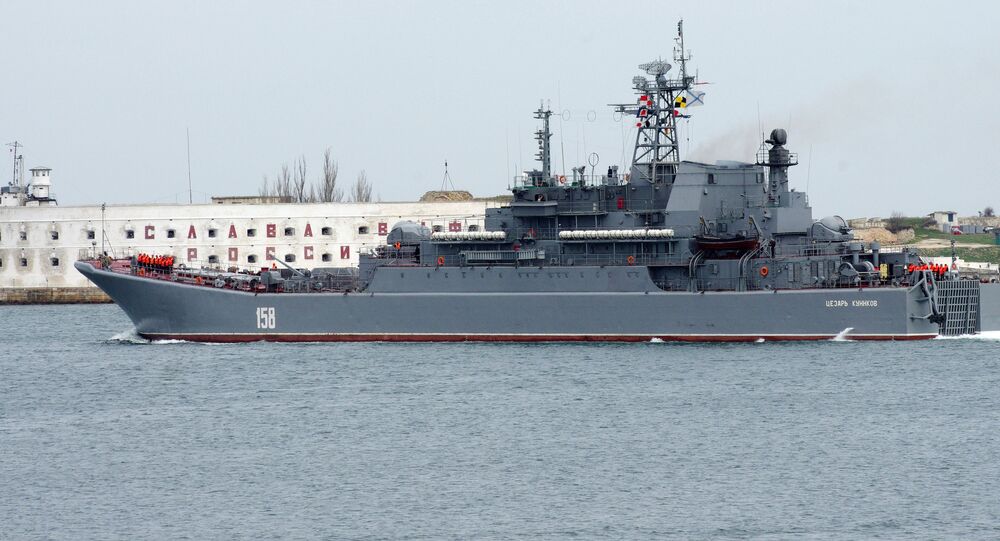 On Tuesday, Ankara summoned the Russian ambassador over a Russian Navy vessel's alleged violation of the Montreux Convention as it sailed through Turkish territorial waters. Blasting the Turkish government's decision, retired Turkish Admiral Turker Erturk emphasized that the Russian ship did not violate any laws.

On Tuesday, Turkey summoned the Russian ambassador in Ankara over images showing a Russian serviceman holding a man-portable surface-to-air missile launcher onboard the Russian Navy's Caesar Kunikov large class landing ship as it passed through the Bosporus near Istanbul.  Turkish officials claimed that Russia had violated the 1936 Montreux Convention regarding the passage of naval warships through the Turkish Straits.

Commenting on Ankara's decision, Russian Foreign Ministry Spokeswoman Maria Zakharova stressed that the Russian vessel did not violate any of the provisions of the Montreux Convention, or the relevant Turkish instructions. Moreover, Ankara, according to Zakharova, had failed to specify the nature of the alleged violation, instead making abstract references to the "context and philosophy" of international laws.

© REUTERS / Murad Sezer
Moscow Denies Violation of Montreux Convention by Russian Warship
Asked for comment on the diplomatic scandal by Sputnik Turkey, Turkish Admiral Turker Erturk (Retired) emphasized that he too did not consider the incident involving the Russian ship to be in violation of international law.

The Admiral began by pointing to the provisions of the international maritime law, which states that "so long as a ship, by its presence, is not prejudicial to the peace, good order or security of the coastal state, passage shall be considered innocent."

Accordingly, Erturk asked: "Was the Russian ship performing military exercises in the Straits? No. Were its guns and artillery emplacements aimed at the city during its passage through the Straits? No. There weren't even any technical staff next to its weaponry."

Furthermore, the admiral emphasized that the security measures taken by the Russian commander during the ship's passage are by no means out of the ordinary, given the security situation in Turkey today, and the risks of terrorist attacks.

"Moscow wasn't the only one to warn of this threat," Erturk noted. "Turkey's ally, the US, for example, has warned its citizens about the serious threat of terrorist attacks by jihadist groups to major Turkish cities. The same goes for Germany. Now imagine yourself in the place of the captain of a ship which is passing through the Straits under these difficult conditions."

© REUTERS / Murad Sezer
Turkey Has No Legal, Economic Basis to Close Bosphorus for Russian Ships
"The passage," the admiral explained, "is quite narrow; there is a section where the width of the strait is only 700 meters. When passing through, the distance of the starboard side of the ship from residential neighborhoods is only 300 meters, and 400 meters from port side. From the Black Sea to the entrance to the Sea of Marmara, the coastal residential areas are very densely built up. If I was in the place of the Russian captain, I would have given the order to put the crew on high alert, and to be ready to repel an attack."

In fact, Erturk noted, compared with the way US Navy ships behave in the Straits, the Russian ship's action seems like a mere trifle.

"Do you know how US military ships pass through the Straits? Compared with the precautions that they take, the actions of the Russian ships seem like a trifle which is not even worth paying any attention to. In order to protect their vessel from possible terrorist attack, the entire crew of the US ship is put on high alert, all its onboard control systems are activated, snipers and sailors armed with Stingers are put on the deck. After entering the Bosporus, American ships are cordoned off by steel nets, so that no one can even get close to them."