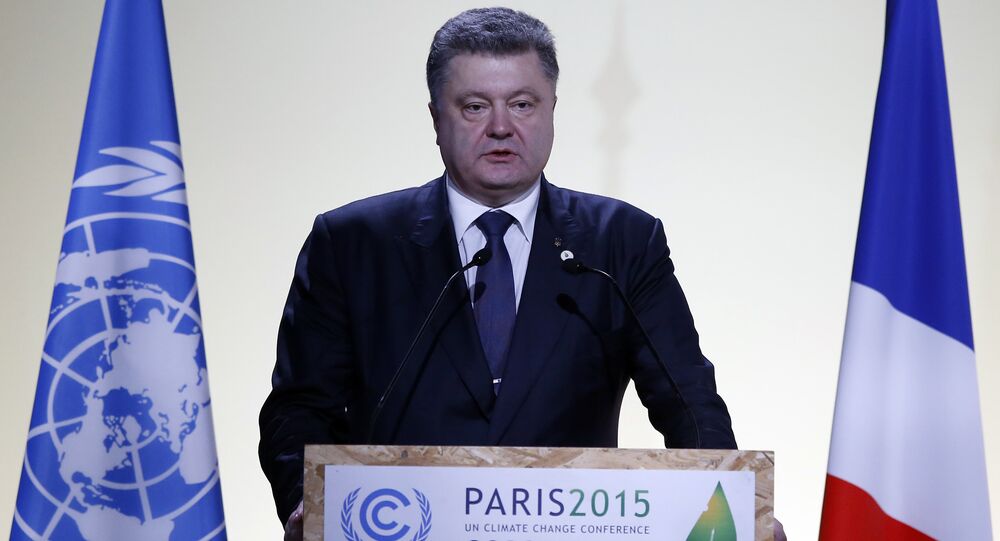 During his visit to the UN Climate Summit in Paris, Ukrainian President Petro Poroshenko found a rather odd way to 'send his condolences' to the Parisians subjected to ISIL terrorism, suggesting that what they had experienced has been "a daily reality" in Ukraine for almost two years. The French response was not long in coming.

In the course of his visit to Paris last Friday, the Ukrainian leader declared that "the terrible events that France experienced this tragic November are a daily reality for Ukraine for almost 21 months. My country" Poroshenko added, "is suffering for the terrorism sponsored and promoted by the Russian Federation."

Sticking to the environmental theme of the summit, Poroshenko also suggested that the "Russian-backed terrorists" (his term for the Donbass militia stepping out to defend their homes against a military operation launched by Kiev last year) have created "the risk of environmental disaster…Their criminal action led to poisoning drinking-water, soil, flora, farming in the region. Donbass became a shooting range for Russian and pro-Russian troops."

Clumsily pouring salt into the wounds of the French people, who lost 130 civilians to brazen Daesh (ISIL) gun and bomb attacks across the French capital on the night of November 13, Poroshenko was sure to tweet the comparison, in English, on his official Twitter page.

The terrible events that France experienced this tragic November are a daily reality for Ukraine for almost 21 months.

How president Poroshenko on visit in Paris dares to say that terrorism faced in France is the daily fate of Ukraine for 21months? #disgrace

Gulliver Cragg, a correspondent for the France 24 news channel based in Kiev, by no means a friend of Russia, was equally perturbed.

Poroshenko's appalling taste in seeking to use #parisattacks to draw attention to #ukraine. Untrue and disgusting. https://t.co/YZjnXkpvNd

Poroshenko pointing to Donbas' dire ecological state is legitimate, but suggesting the threat #Ukraine faces is a terrorist threat — idiotic

No they are not. A tactless remark and attempt to use #ParisAttacks to bring attention to #Ukraine, Mr. President. https://t.co/YHDmrUOcaE

Incidentally, Poroshenko's slap in the face to the French was not the only noteworthy moment during his trip to Paris.

Shunned once again by US President Obama, who literally walked past the Ukrainian president as he moved to shake hands with world leaders lining up for a group photo, Poroshenko met with Turkish President Recep Erdogan instead, vowing more economic, political and security cooperation between the two countries, in the wake of deterioration of relations between Ankara and Moscow following Turkey's shoot down of a Russian Su-24 over Syria late last month.