A Canadian social activist organization said that Canada’s newly-elected Liberal Party government might be forced to overcome its support for TPP agreement if the deal is subjected to more public scrutiny.

WASHINGTON (Sputnik) — Canada’s newly-elected Liberal Party government might be forced to overcome its support for the Trans-Pacific Partnership (TPP) agreement if the deal is subjected to more public scrutiny, a Canadian social activist organization told Sputnik.

On Monday, Justin Trudeau’s Liberal Party won almost 40 percent of the votes cast in Canada’s general election, translating into 184 of the 338 seats in the Canadian House of Commons.

"While there may be some pro-TPP forces within the Liberals, their position is not 100 percent defined," Council of Canadians trade campaigner Sujata Dey told Sputnik on Wednesday. "With public outcry, and a public process, we hope that the Liberals will budge somewhat in their position."

The incoming Trudeau government, trade experts told Sputnik earlier on Wednesday, is likely to eventually approve the TPP agreement after taking it to parliament for discussion. 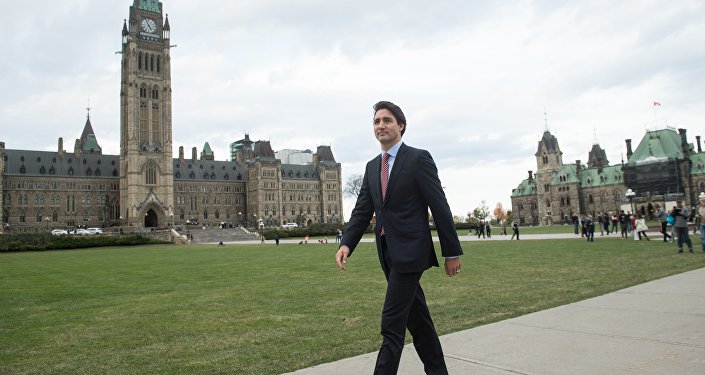 © AFP 2019 / NICHOLAS KAMM
Canada’s New Government to Support TPP Deal After Parliamentary Review
The Council of Canadians, Dey added, hopes to push the Liberal Party to challenge the terms of the TPP agreement.

"We [the Council of Canadians] would definitely call on the new [Trudeau] government to reject the TPP deal, which we feel has severe implications on the ability of governments to protect drug prices [and] make laws and policies on the environment," Dey argued.

"The Liberal position has been that trade agreements such as the TPP are good for the economy, but that the secrecy surrounding the trade agreement, and Harper’s approach to it, may be the wrong one because it has not resulted in economic growth, but rather [has] exacerbated trade deficits," Dey noted.

The TPP deal is being kept secret from legislators, but has been open to 600 US corporate lobbyists, she claimed.

Dey also said her organization is worried that the pro-privatization streak that runs through the TPP agreement will put the government in a "strait jacket" and force it to strip away public services.