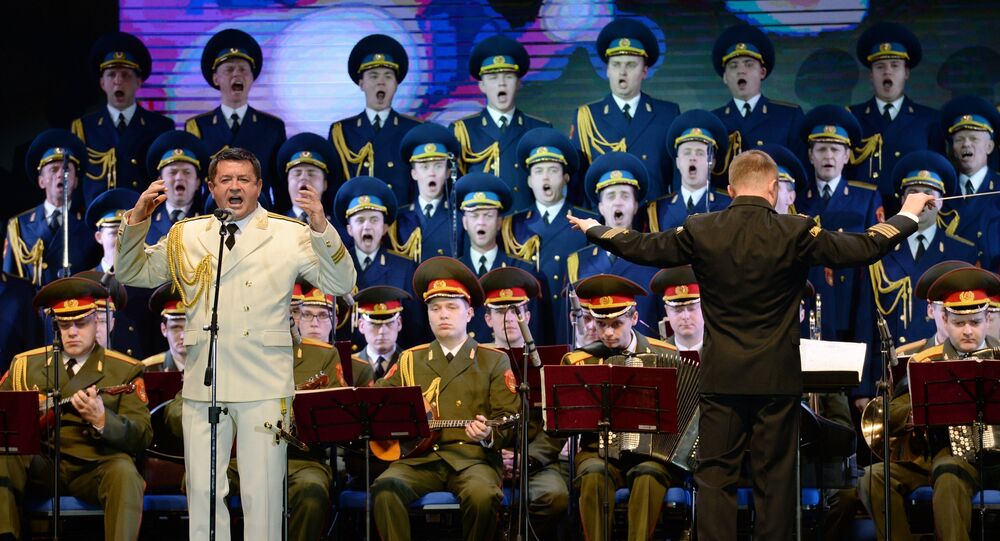 Polish activists are demanding that a Russian army choir cancels its upcoming tour of Poland, threatening that if the concerts are not canceled, they will show up to scream, whistle, and drown out the performances with the clattering of pots and pans, Polish Radio has reported.

© Sputnik / Morozov
Diplomatic Drama: 70 Years Later, Poland & Russia Still at Odds Over WW2 History
The Alexandrov Ensemble, one of Russia's official military choirs, complete with its own dance ensemble, is scheduled to conduct a tour of 13 Polish cities beginning next month.

Now, a group of Polish Facebook users has launched an initiative demanding that the ensemble cancel all its performances in the country, threatening that they will disrupt the concerts in any way they can should the artists decide to perform. The activists condemn the choir, which they say performs "for Putin" and, in their words, creates an inappropriate mix of culture and politics.

In their appeal, the activists recalled the successes of several earlier internet campaigns to stop Russians from moving about the country. These included the cancelation of the Russian ambassador's address at Krakow's Jagiellonian University in March, and an initiative to stop a Russian motorcycle club from driving through Poland on their way to Berlin to celebrate the 70th anniversary of victory in the Great Patriotic War. Inspired by past successes, the Facebook appeal suggests that "we can handle the Alexandrov Ensemble, too. Let's get to work!"

The activists, numbering about 1,300 so far, have already gathered the sympathy of some high profile politicians and social figures, including Law and Justice MP Malgorzata Gosiewska, who told Polish Radio that she wholeheartedly supports the initiative.

"I highly value democracy, peace and the right of people to independently choose their own path of development. I cannot agree to performances by a choir which celebrates the aggressor country and its army," Gosiewska declared.

© Flickr / Anosmia
Operation 'Boo Putin' Targets Russian Ambassador to Poland
For its part, the ensemble has no plans to cancel the performances, and is confident that they will be able to proceed. Speaking to radio station Russian News Service, ensemble spokeswoman Valentina Maximova noted that "our impresario is confident that the concert will take place. The calls to bang pots to disrupt the performance are just isolated cases. The Poles are positive toward us."

Maximova added that while a few hundred people may show up to try and disrupt the performances, "at our shows there are between 4-5 thousand people. They can bang their pots for a bit, and then everything will return to normal."

Speaking to Sputnik, Polish concert and film festival organizer Piotr Skulski suggested that the ban was an attempt to scare people off from attending the ensemble's performances. He emphasized that most Poles understand that this is a cultural project, and not connected to politics. Skulski added that if anyone shows up to make a ruckus, they will be kicked out. "Our audiences buy their tickets for the Alexandrov Ensemble's concerts in advance, and pay out of their own wallets, and we will not allow anyone to spoil our audience's experience."

© Photo : UN
Poles Jump for Joy Over Obama's Decision Let Polish Prez Sit Beside Him at UN
The Alexandrov Ensemble is named after Alexander Alexandrov, a Soviet composer best known for the music for the national anthem of the Soviet Union, whose music returned to become the anthem of Russia in 2000.

In 2014, the choir made waves by releasing several YouTube videos offering the ensemble's commentary on the crisis in Ukraine. The first, released in April 2014, praised the 'polite people', the Russian forces stationed in Crimea charged with ensuring order in the aftermath of the Maidan coup d'etat. The second, released in June 2014, was addressed to President Petro Poroshenko, entitled 'Moskals Dance Gopak'. It featured an energetic folk dance accompanied by the phrase "it's better to dance than to fight," together with an image of Russian and Ukrainian flags tied together in friendship. Earlier this year, the ensemble released a compilation CD of Ukrainian folk songs.