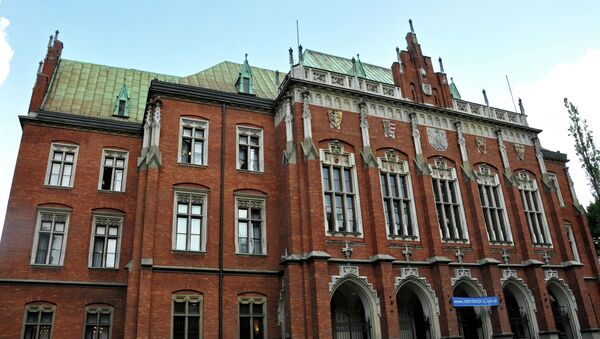 © Flickr / Anosmia
Subscribe
Online activists in Poland have successfully broken off the Russian Ambassador's plans to give a speech and engage in a discussion with students at the Jagiellonian University in Krakow, Polish media have reported.

Russians Accused in Kaczynski Plane Crash Are Innocent - Polish Expert
Russian Ambassador to Poland Sergei Andreyev had been scheduled to give a short, 20 minute speech this Tuesday at the university, followed by an open discussion with students on international politics and relations between Poland and Russia.

Polish news portal Na Temat has explained that internet activists had begun organizing an effort to stop the lecture from taking place about three weeks ago, after Andreyev had appeared on Poland's TVN24 and stated that Russia has no aggressive intentions toward any country, and that there were no Russian military forces in eastern Ukraine.

Poland Requests US Patriot Missiles - US Missile Defense Commander
The internet operation consisted of two Facebook campaigns, one of them translating roughly as "Operation Boo Putin." The action garnered about 200 signatures, which were presented to Rector Nowak, Na Temat explained.

The organizers' petition noted that it would be a "desecration" of the university's walls to conduct an academic discussion with Andreyev, who was characterized as a "representative of the Russian dictatorship." The petition condemned what it called Russia's "annexation" of Crimea, and criticized its alleged involvement in the ongoing civil war in eastern Ukraine.

Bizarrely, the organizers also referenced the tragic events of November, 1939, when the invading Nazi German occupation forces arrested nearly 200 scholars from Krakow, and said that Russia's present activities resemble those of the Third Reich in 1939. Incidentally, this January marked the 70th anniversary of Krakow's liberation by Soviet and Polish armies in 1945.

Opponents of the diplomat's visit to the university said that they would hold a protest outside the university if the meeting and talk was to take place.

Finally Admitted: Poland Concerned Over Rising Ukrainian Nationalism
The campaign to cancel the meeting was supported by senior Polish Senator Bogdan Klich, who sent Nowak an official letter of protest, and later posted it on his social network account. The politician called for the lecture to be canceled given that "instead of appropriate academic debate, this meeting would be used for the purposes of spreading propaganda of the current Russian government."

Defending the planned meeting in Polish media earlier this week, Jagiellonian University spokesman Adrian Ochalik stated that the meeting had been planned as far back as last November, adding that the university has been conducting a series of lectures with ambassadors for over three years now, as part of an effort to give students an opportunity to discuss and debate issues in international politics face to face with representatives of other countries. Ochalik noted that similar meetings in the past have always taken place in a calm and polite atmosphere.