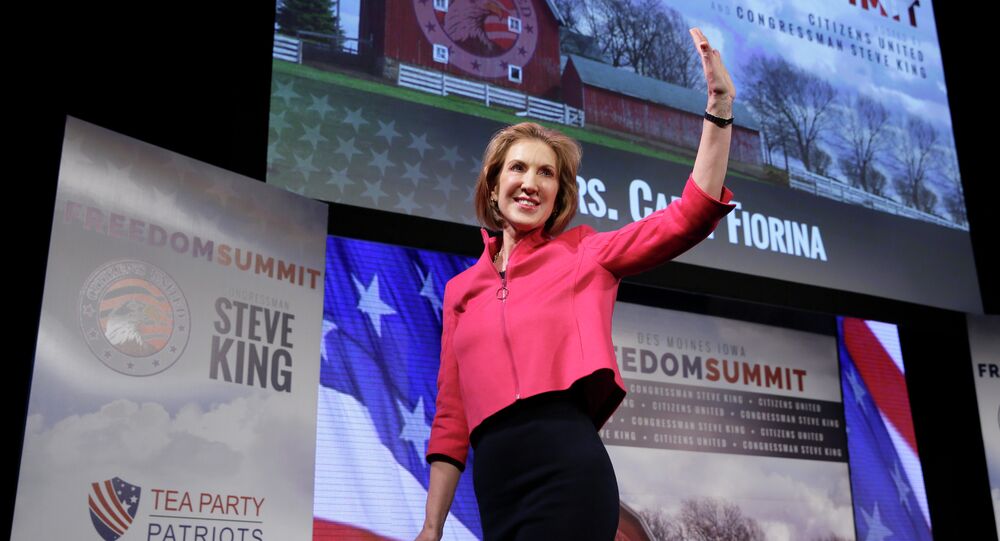 US presidential candidate Carly Fiorina outlined a belligerent national security platform during a widely-televised debate this week that would likely provoke a nuclear war with Russia, former Central Intelligence Agency (CIA) officer Larry Johnson wrote in an article published on his website No Quarter.

WASHINGTON (Sputnik) — Republican presidential contenders on Wednesday participated in a debate at the Ronald Reagan Presidential Library in California, during which Fiorina laid out her hawkish defense doctrine.

"Rather than discuss how we should work with Russia to contain and destroy Islamic extremism, Carly Fiorina offers up a recipe for a nuclear war with Russia," Johnson argued on Thursday. "Her laundry list, which included deploying missile defense systems to Poland and a massive build up [of] our ground and naval forces, is nothing more than provocation against Russia."

Russia under Putin’s leadership, Johnson noted, is behaving like the only adult in the world, especially in the Middle East, a reality obviously lost on the presidential candidate.

"Fiorina insists that his [Putin’s] intervention in Syria to keep the secular rule of Bashir Assad intact is some sort of challenge to our [US] security," Johnson noted.

The Russia bashing came up in the context of discussing Syria, he observed, elucidating Fiorina’s disconnect with reality and her lack of understanding as to why the region is really "blowing up."

The situation was sparked by outside intervention led by Turkey and Saudi Arabia with the covert support of the United States, including arming rebels, the former CIA officer claimed.

"This madness was courtesy of Barack Obama and Hillary Clinton," Johnson added.

Russia has been engaged in international efforts to find a political solution to the ongoing conflict in Syria and has been providing humanitarian aid to the conflict-torn country.

© Sputnik / Andrei Stenin
Russia Open to Dialogue With US on Moscow-Damascus Military Cooperation
The United States is leading an international coalition that has been conducting airstrikes against ISIL positions in Iraq since August 2014 and in Syria since September 2014.

The United States has also been supporting the so-called moderate Syrian opposition by providing it with training and equipment.

On Thursday, the State Department said the United States is considering a Russian proposal to open up direct talks on a more effective approach to defeating the Islamic State in Syria.