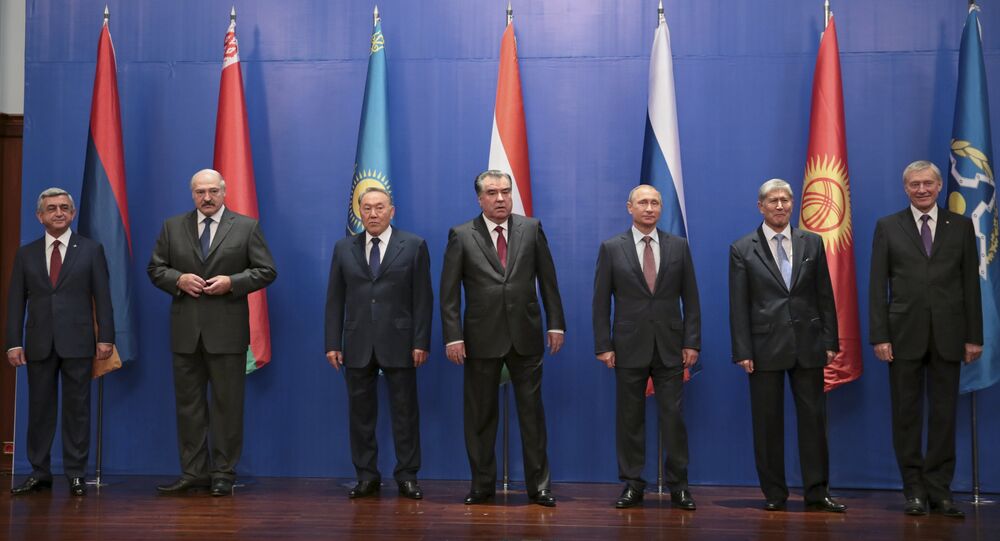 The leaders of Russia, Tajikistan, Kazakhstan, Kyrgyzstan, Armenia and Belarus are expected to discuss the issues of terrorism and extremism as well as the situation on the CSTO's borders.

MOSCOW (Sputnik) — A summit of the Collective Security Treaty Organization (CSTO) kicked off in Tajikistan's capital Dushanbe on Tuesday.

The leaders of the member states arrived in Dushanbe on Monday.

During the summit, Russia's President Vladimir Putin, and his counterparts from Tajikistan, Kazakhstan, Kyrgyzstan, Armenia and Belarus are expected to discuss, among other points, the issues of terrorism and extremism, as well as a number of common challenges for CSTO members, including the situation on the alliance's borders and military-technical cooperation.

The agenda for Tuesday includes meetings of the foreign and defense ministers, as well as of the Committee of Secretaries and the CSTO Collective Security Council.

The six CSTO leaders will first meet in a narrow format before a scheduled gathering with all the delegations.

© Sputnik / Sergey Kuznecov
Russia Willing to Set Up Airbases in All CSTO Countries
The summit participants are also due to consider electing a secretary general to lead the CSTO. Long-standing acting CSTO Secretary General Nikolai Bordyuzha has headed the alliance since 2003.

The meeting of the CSTO Collective Security Council is expected to conclude in a joint statement, which is expected to reflect the body's common approaches to existing challenges. More than a dozen documents on the current activities of the CSTO are also expected to be signed.

Armenia is due to host the next CSTO summit and is expected to present its proposals and guidelines regarding the rotating presidency.

Russia Rules Out CSTO Cooperation With NATO in Afghanistan