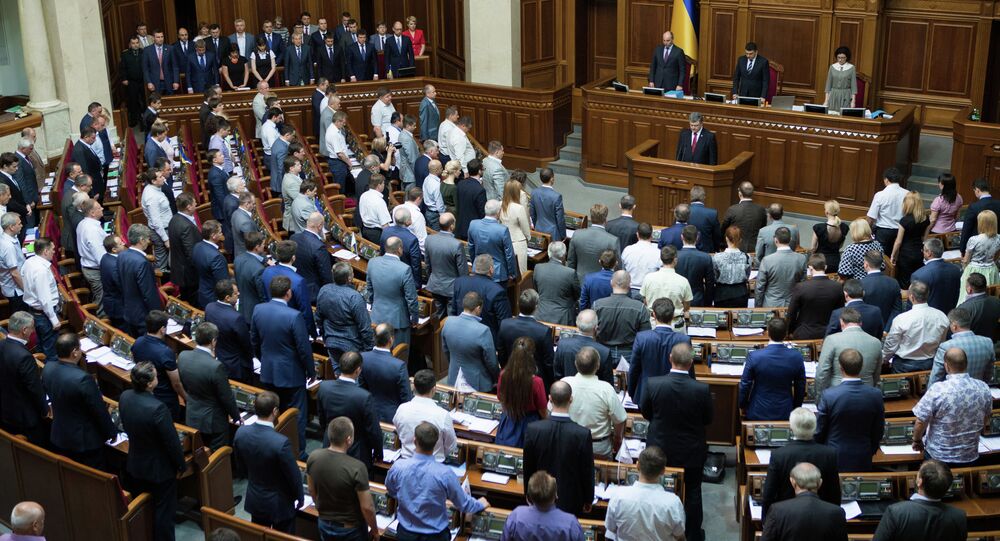 Ukrainian President Petro Poroshenko has called into question the implementation of the peace deal with the Donbass republics when he proposed unilateral changes to the constitution, Russia’s EU envoy Vladimir Chizhov said Monday.

ALPBACH (Austria), (Sputnik) – The Ukrainian parliament is debating changes to the constitution that are part of Kiev’s agreement with the self-proclaimed people's republics of Donetsk and Lugansk, reached in February. Under the Minsk ceasefire deal, the warring parties are to thrash out around a dozen of laws to decentralize Ukraine, including greater autonomy and a "special status" for the Donetsk and Lugansk republics.

"Constitutional amendments were proposed by President Poroshenko without any consultation with them as foreseen by the Minsk agreements," Chizhov said at the European Forum Alpbach in Austria.

"The political part of the Minsk agreements is unfortunately not being implemented at all because it foresees a law on special status for those regions of Donetsk and Lugansk, negotiated between the Ukrainian governments and the authorities in those two areas,"

© REUTERS / Axel Schmidt
Kiev Defies Minsk Accords, Resists Western Demands for Donbass Self-Rule
But President Poroshenko assured the parliament last week there was not a word on special status for the self-proclaimed republics in the draft constitutional amendments.

"I think the core of the problem is the inability, or unwillingness, or both, of the Ukrainian government and President Poroshenko to sit down and negotiate directly with representatives of Donetsk and Lugansk," Chizhov suggested.

On Monday, 265 out of 450 Ukrainian lawmakers backed in the first reading a bill to devolve more powers to regions, prompting violent clashes outside the parliament between riot police and members of Ukraine’s nationalist political parties. One police officer died of wounds he sustained when an alleged Svoboda party member detonated a grenade. Over a hundred of people were injured.

West Preparing Plan B in Event of Minsk Agreement’s Failure