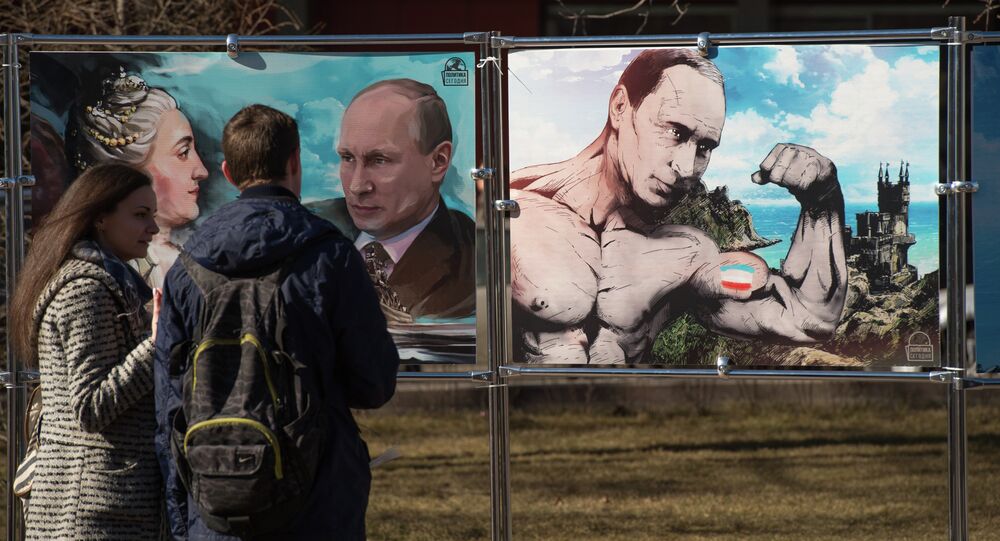 France is following foreign policy lines dictated by the US, especially toward Russia, French lawmaker Nicolas Dhuicq said. He also pointed out that reunification with Russia prevented Crimea from being dragged into a civil war.

Crimea, a Black Sea peninsula with a predominantly Russian population, voted in March 2014 to join Russia. The following month, Ukrainian government troops moved into Ukraine's eastern provinces to clamp down on anti-Kiev militias there. The revolt escalated into a civil war that has left over 6,500 people dead, according to UN estimates.

"We all think that Crimea is Russia. It is populated by Russian Orthodox people. So we believe that the Russian president did what he had to do, that is to protect people against a civil war," Dhuicq told Sputnik.

He added that a war in Crimea was a likely scenario due to the influence that far-right forces have in the Ukrainian government, including the notorious Right Sector party.

“If Crimea hadn’t been back to Russia we would have had a civil war there with the extremists within the Ukrainian government,” Dhuicq said.

Despite the fact that the referendum was carried by 96 percent, Kiev and the West labeled Crimea's secession from Ukraine illegal and introduced a series of sanctions against Russia in response.

© Flickr / Jo Morcom
I Put a Spell on You: Europe 'Completely Under US Control'
Dhuicq also pointed out that Foreign Minister Laurent Fabius blindly follows the foreign policy dictated by the United States, failing to focus on historic facts and traditional relations between nations.

On Thursday, a delegation of French lawmakers, including Dhuicq, will arrive in Crimea for a trip that will last until Sunday. Paris condemned the move, with French Foreign Ministry spokesman Romain Nadal saying the visit was in breach of international law.

“The French foreign minister is just following the general lines dictated by the US and we do not have, for the moment, a true French independent foreign policy. He does not known history, and very few people know the history between Ukraine and Russia,” Dhuicq said.

According to the French parliamentarian, some French politicians have forgotten the history of WWII, and the fact that Russia help liberate Europe and contributed to restoring peace in the whole region.

“We no longer have politicians who know history and they have forgotten the history of WWI, the history of WWII and the fact that Russia [Soviet Union] lost 26 million of its people so that we could be free. They [French politicians] are obsessed with the American Empire and they do not want to have the free will anymore to to say, ‘We, France, have a right to say no, we have a right to think that it is a good world to live in when the world is composed of different powers, not a single one,’” Dhuicq stressed.

© Sputnik / Vladimir Sergeev
US Wants to Squeeze Russia Out of Europe – French Analyst
Speaking on the current tensions between Russia and Western countries, the lawmaker pointed out that the US wants to isolate Russia from Europe to prevent it from becoming a major world power.

Washington initiated this plan about a decade ago under the supervision of then-US National Security Adviser Zbigniew Brzezinski, he claimed.

"I believe that the plan is the same. It is to find a way to prevent Russia from becoming a [world] power again so that Europe stay as it is," the lawmaker said, adding that Brussels toes the US line on foreign policy.

Following the reunification, Moscow's relations with the West, including France, deteriorated. The European Union has blamed Moscow for its alleged interference in Ukraine's internal affairs – a claim that the Kremlin has firmly denied.

French Companies Want to Continue Business in Russia Despite Sanctions