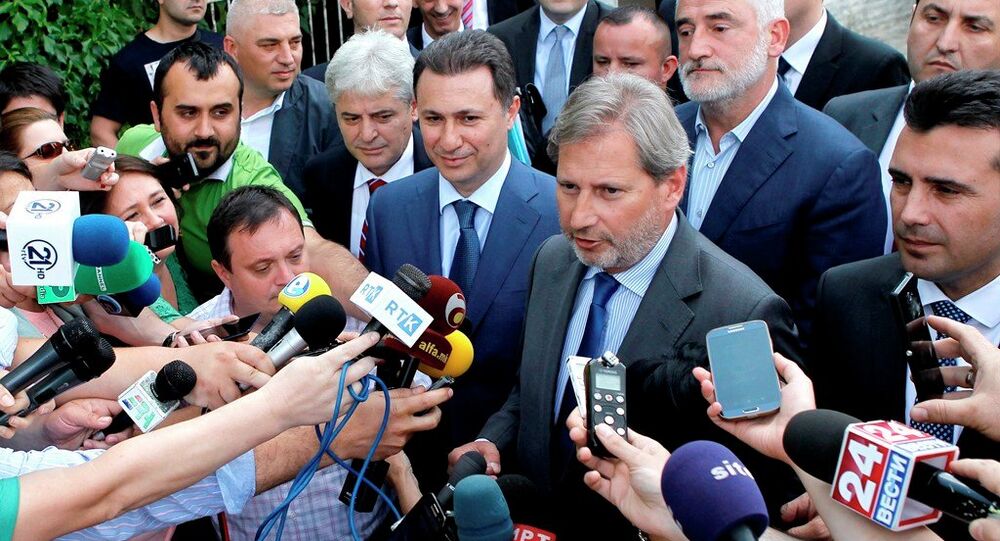 The leaders of Macedonian political parties failed to reach an agreement on settling the crisis in the country during Wednesday talks, a European Commission press release said.

MOSCOW (Sputnik) — On Wednesday, Commissioner for European Neighborhood Policy and Enlargement Negotiations Johannes Hahn met with the leaders of the four main political parties in Macedonia in Brussels to continue discussions on finding a solution for the political crisis in the country.

"The talks were open and detailed, but did not lead to a final agreement yet. The European Union urges all parties — in the interest of their country and its citizens — to find a lasting political compromise without any delay and come forward with concrete proposals to this end."

The European Commission said necessary reforms must be implemented urgently, as it was essential for the country’s progress "on the Euro-Atlantic path."

Macedonia has been mired in a political crisis since the elections in April 2014. The opposition blames the government of current Macedonian Prime Minister Nikola Gruevski for the country's social and economic problems, aggravated by corruption.

In May, opposition groups staged mass anti-government protests in the Macedonian capital of Skopje that drew thousands of demonstrators.

Almost Forgotten: Macedonia Comes in the Spotlight of EU Policies