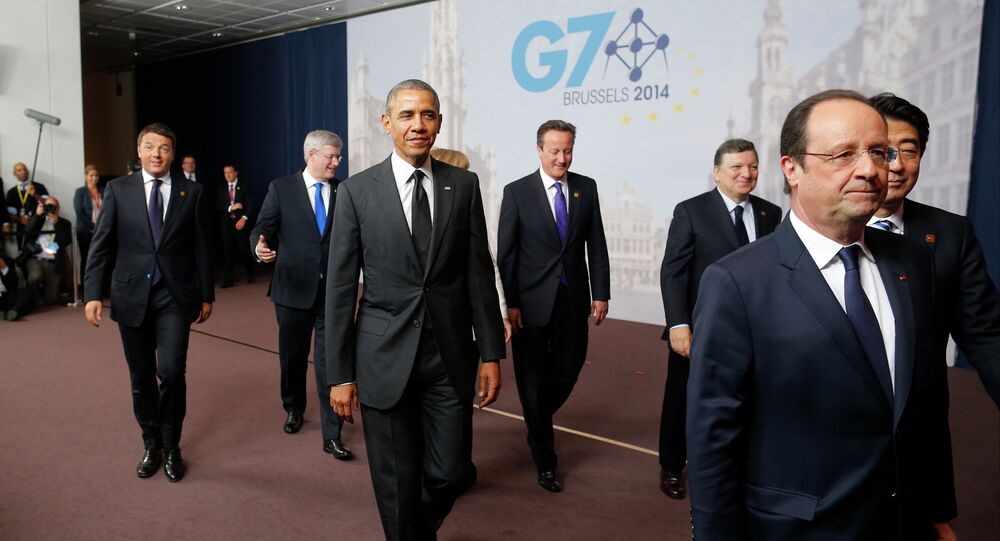 Moscow-Western relations, the extension of the anti-Russia sanctions and the Greek debt payback are high on the negotiations agenda of the G7 summit.

MOSCOW (Sputnik) — The relations of the Western countries with Moscow, the extension of the anti-Russia sanctions and the Greek debt payback are high on the negotiations agenda of the G7 summit, which began Sunday in Bavaria, Germany.

The leaders of G7, comprising Canada, France, Germany, Italy, Japan, the United Kingdom, and the United States, shared their opinions regarding the issues that should be covered during the event.

Moscow’s participation in the group’s meetings was suspended in March 2014 soon after the Black Sea peninsula of Crimea rejoined Russia following a referendum.

The Russian factor at the summit

The G7 leaders shared their position on extension of anti-Russia sanctions, as German Chancellor Angela Merkel said she expected the the countries' heads to send a "united signal."

US President Barack Obama noted the need to stand up to "Russian aggression in Ukraine."

"We have always said that there is a connection between the implementation of the Minsk agreements and the extension of sanctions with the possibility of withdrawing them," Merkel said.

According to the German chancellor, the anti-Russia sanctions will be lifted if the Minsk agreements on Ukrainian reconciliation are implemented.

"If it comes to Russia and the sanctions, obviously I think it is the most important thing today, because we need to maintain sanctions against Russia, because of the clear violation of Minsk agreements", Tusk said, adding that the European Council wanted to have Russia as a partner.

Minsk agreements on Ukrainian reconciliation, signed by the eastern Ukrainian militias and Kiev in February, stipulate ceasefire, withdrawal of heavy artillery from the contact line and prisoner exchanges.

Bringing the Greek issue to the negotiations table

The economic situation in Greece, the country's debt and financial obligations to international creditors became the second biggest issue for discussion at the G7 summit.

Greece has been locked in talks with its international creditors over the country’s outstanding debt as Athens look to avoid default and a possible exit from the Eurozone, known as Grexit.

European Commission President Jean-Claude Juncker repeatedly stressed he was expecting Greece to come up with a new plan for economic reforms that would help the debt-ridden country get the financial aid it wants.

"I hope the Greek alternative will reach us in the future. As before, I would exclude the idea of Grexit, but I do not want people to say that the Commission is trying to pull the rabbit out of the hat," Juncker said.

Juncker explained the Greek Prime Minister Alexis Tsipras had promised to prepare an alternative several times during the past week. Tsipras has not done so yet, according to the European Commission chief.

Italian Prime Minister Matteo Renzi said that the Greek government had to understand that the reforms offered earlier by the international creditors need to be passed.

According to Renzi, Grexit would be an economic and a geopolitical mistake.

Greece was due to make a scheduled $330-million repayment to the IMF, but decided to skip the deadline. Instead Athens said it would make all of its current four IMF debt repayments in one go before the end of June, when Greece's current bailout deal with international creditors is slated to expire.