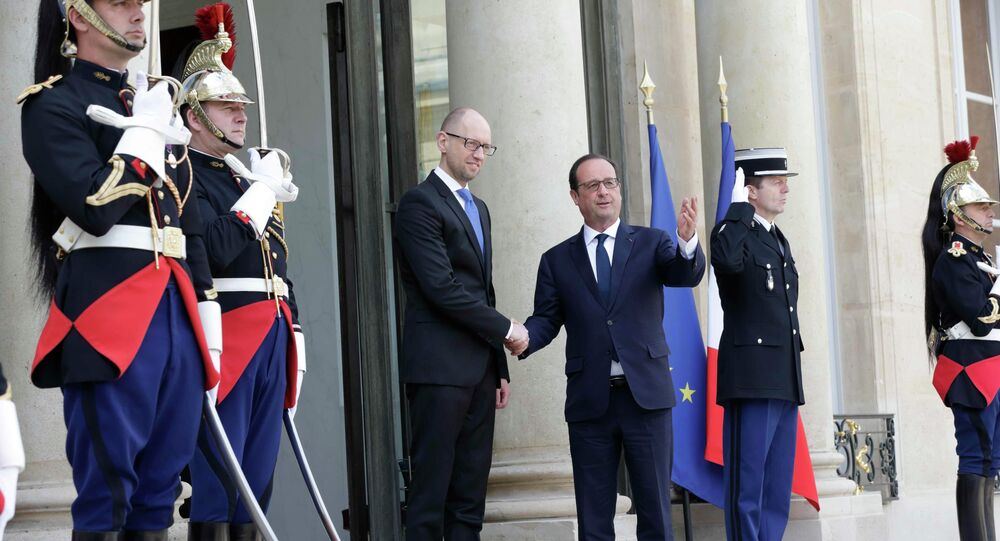 Confronted by a reporter over Kiev's bloody military campaign in eastern Ukraine, Prime Minister Arseniy Yatsenyuk indirectly acknowledged his government's responsibility for the carnage, bluntly refusing to answer the question and blaming the bloodshed on Russia, French news portal AgoraVox has reported.

© AFP 2020 / TOBIAS SCHWARZ
Ukraine is 'Bulletproof Vest' of Europe - PM Yatsenyuk
Coming out to speak with press after meeting with French officials in Paris earlier this week, Yatsenyuk was asked point blank by Frederic Saillot, a reporter for Eurasie Express: "Mr. Yatsenyuk, when will you stop the genocide in Donbass?"

Riding roughshod over the emotionally charged question, Yatsenyuk did not deny that Kiev's policy was genocidal, answering instead that the genocide would stop "when Putin pulls back and implements the Minsk deals and stops the violation of international law, and when Russia will be brought to justice."

Rebutted by the journalist, who noted that between six and ten thousand people have already been killed in the civil conflict and asked "Will you continue?", Yatsenyuk blamed Russian President Vladimir Putin, noting "That's awful. President Putin due to his far-right nationalistic policy killed innocent Ukrainians, illegally annexed Crimea, and invaded Donetsk and Lugansk."

Once again rebuked by Saillot, who told Yatsenyuk bluntly "You killed innocent Ukrainians!", the prime minister simply turned away and began answering others' questions, including whether or not Sochi was a good place for a meeting between Russian officials and US Secretary of State John Kerry, to which Yatsenyuk naturally answered in the negative.

In the course of his Paris visit, Yatsenyuk also told Le Monde that he was convinced that Ukraine is now on the verge of a nuclear war with Russia, adding that his country heroically plays the role of Europe's "bulletproof vest." Last month, the gaffe-prone prime minister voiced his hope that Ukrainian would become an official language of the European Union, adding that English and French would soon become the two working languages in the Ukrainian government.