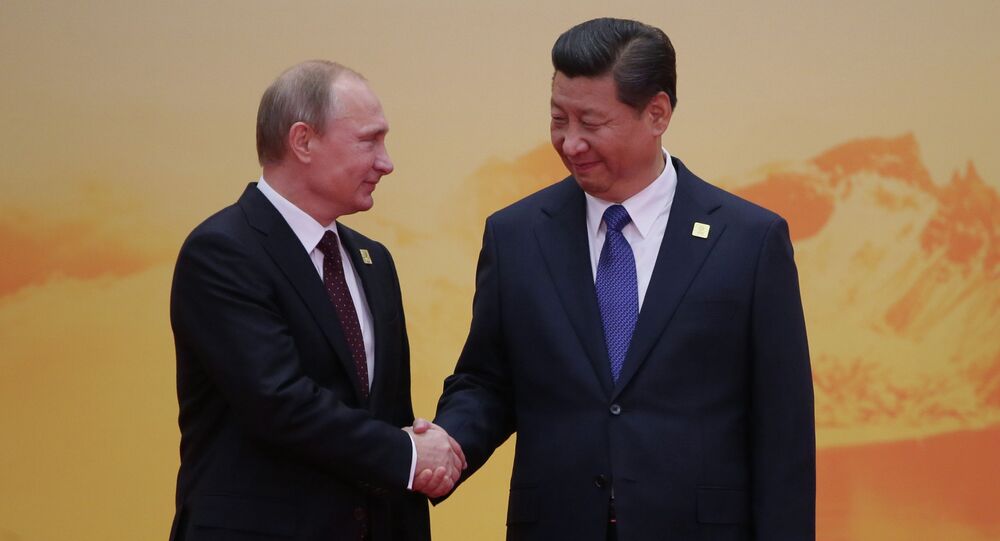 Beijing and Moscow have increasingly found common basis in challenging the US and Western dominated order in Europe and Asia.

China and Russia are striking a number of deals to strengthen their military, financial and political ties in recent times.

Beijing and Moscow have increasingly found common basis in challenging the US and Western dominated order in Europe and Asia.

© Photo : Vladimir Maximov, St. Andrew flag Film Company, http://www.mamm-mdf.ru/
Russia, China to Close Joint Helicopter Construction Deal in May
The recent sign of closer ties was seen with the announcements of the first joint naval exercises in the Mediterranean. Chinese National Defense Ministry spokesman Geng Yansheng said that Moscow and Beijing will for the first time hold joint naval drills in the Mediterranean Sea in mid-May 2015.

The purpose of the drills is to deepen bilateral friendly cooperation and strengthen the combat capability of the two countries in order to resist threats to maritime safety.

“Russia and China are now becoming, as we wanted, not only neighbors but deeply integrated countries,” Russian Deputy Prime Minister Dmitry Rogozin told reporters on a trip to the eastern Chinese city of Hangzhou this week.

The two sides further discussed making China the “main partner” in a Russian program to establish a scientific station on the moon by 2024.

Similarly, Russia will be one of the biggest outside investors in China’s proposed development bank, The Asian Infrastructure Investment Bank (AIIB).

© REUTERS / Greg Baker/Pool
Size Matters: Obama’s Concern About China’s Muscle Leaves Beijing Concerned
The Obama administration tried to undercut the proposed bank, but China views the AIIB as a way to diminish the regional influence of the World Bank and Asian Development Bank (ADB), where countries like the United States and Japan hold significant control.

China’s president is also going to be one of the most prominent leaders to attend the 70th anniversary of the victory over Nazi Germany in Moscow’s Red Square on May 9.

Furthermore, western media made a remark of a budding “bromance,” between Russian President Vladimir Putin and Chinese President Xi Jinping.

According to some key analysts the relationship between Moscow and Beijing is likely to move forward in a number of key areas.