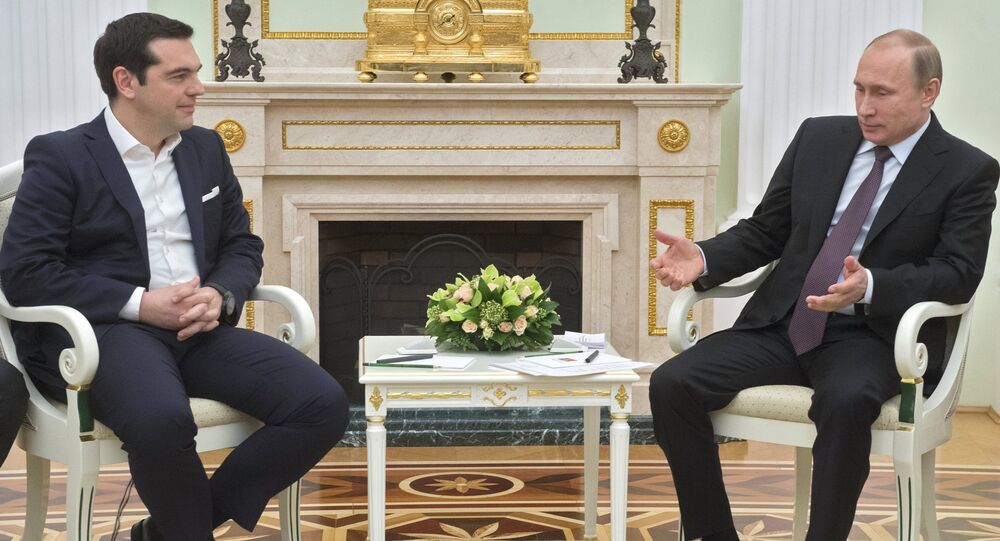 Greece and Russia can play an important role in establishing stability and security in Europe "without walls of the Cold War," without contradictions of the past, and where Russia will occupy the place it deserves, according to Greek Energy Minister Panagiotis Lafazanis.

"The visit to Moscow and meetings that have been held here open a new era in Greek-Russian relations, a new chapter, promoting economic and political ties that change the makeup of our region and, I would say, of Europe," the minister said.

According to Lafazanis, Greece and Russia can play an important role in establishing stability and security in Europe "without walls of the Cold War," without contradictions of the past, and where Russia will occupy the place it deserves.

"And, of course, Greece with the relationship it develops with Russia increases its international role, gets a much better position to end today's terrible crisis," Lafazanis added.

"In Europe, there is no need for American hegemony, nor German domination. Europe must consist of equal countries, equality and mutually beneficial cooperation should be there for the benefit of all peoples, for the benefit of European development, for the future. Now there is no equality in Europe, with Greece being treated as a colony of a new type. This is absolutely unacceptable."

© AP Photo / Alexander Zemlianichenko, Pool
Tsipras’ Top Three Take-Aways From Moscow
"Greece is a sovereign country, which needs to be supported to end this crisis, not be pressured into austerity measures and measures that lead to the economic recession, Greek society’s nightmare," Greek minister pointed out.

On Wednesday, during a meeting with Russian President Vladimir Putin, Tsipras mentioned that a dialogue on European security is impossible without Russia, adding that Greece will use its presence in various EU institutions to promote Moscow's involvement.

President Putin said that Moscow is ready to support Greece's decision to strengthen bilateral ties with Russia in the interests of the countries' economies.

Western media and some officials condemned Tsipras' visit to Moscow in light of the tense relations between Russia and the European Union over the Ukrainian crisis.

The left-wing Syriza party, led by Tsipras, came to power in Greece in January, and has taken a pro-Russian stance, saying that Athens wants to increase its cooperation with Russia in energy and other areas.