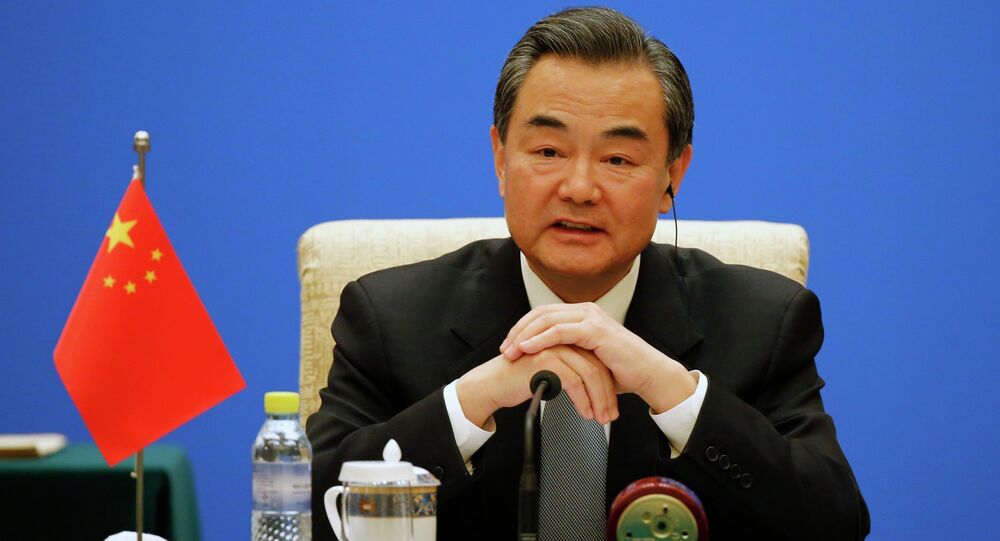 The Ukrainian crisis has to be solved through political means only, the top diplomat underscored, adding that military solution is not an option.

In October, Chinese media quoted Wang Yi as warning Ukraine not to let the US and the EU turn Russia into an outcast by imposing sanctions on Russia for Moscow's alleged involvement in the Ukrainian crisis. "China believes sanctions against Russia are a wrong move," the Chinese foreign minister said, according to Mychinanews website.

"China's stance on Ukraine has been objective and impartial from the beginning," Wang Yi told the Rossiya 24 television channel.

"The Ukrainian authorities should develop relations between different regions, different nationalities in the country in a balanced way."

© Wikipedia / Vmenkov
China People's Daily Slams Western Sanctions Against Russia
Wang Yi also spoke highly of Moscow's role in reaching and implementing the second peace deal on Ukraine, known as the Minsk agreements. The deal included a ceasefire, withdrawal of heavy weapons from the line of contact between the Kiev forces and independence supporters and amendments to the Ukrainian constitution.

China's foreign minister met with Russian President Vladimir Putin and Foreign Minister Sergey Lavrov while in Moscow. The high-profile visit was aimed at making final arrangements for the upcoming visit of Chinese President Xi Jinping to the Russian capital. In May, the Chinese leader is expected to attend Victory Day celebrations, marking the 70th anniversary of the end of World War II.