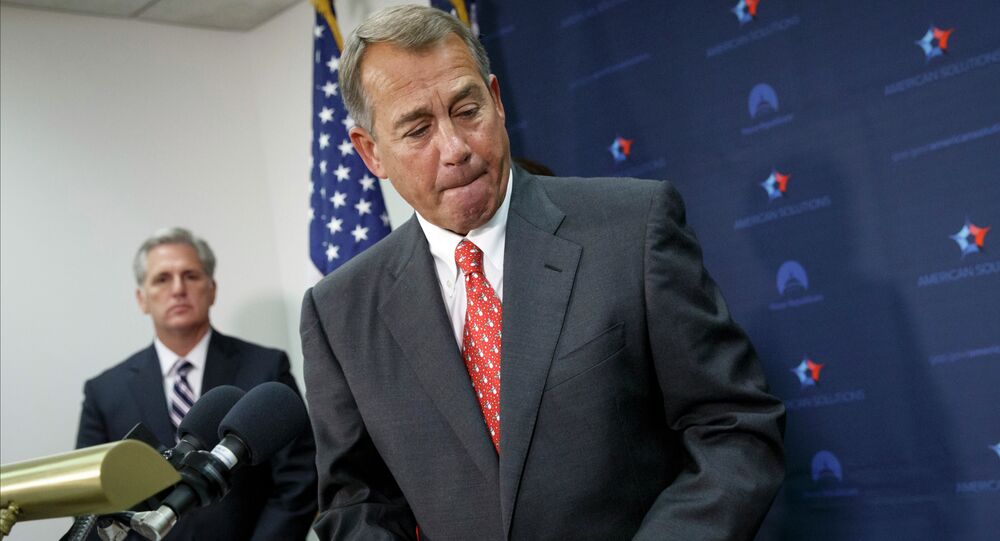 A group of US Republican lawmakers will travel to Britain, Jordan and Iraq to discuss the issues of security cooperation, said US House of Representatives Speaker John Boehner.

WASHINGTON (Sputnik) — A group of US Republican lawmakers are using their Easter recess to travel to the United Kingdom, Jordan and Iraq to discuss how the countries can strengthen security cooperation, US House of Representatives Speaker John Boehner announced in a statement.

“During a visit to Iraq on Monday, House Speaker John Boehner (R-OH) and senior lawmakers met with the country’s leaders and our ambassador [Stuart Jones] and commanders on the ground to assess efforts to defeat ISIL [Islamic State of Iraq and the Levant] and combat Iran’s rising influence,” the statement, issued on Tuesday, said.

© AP Photo / Public Domain
US Approves Sale of Patrol Boats, Weapons to Jordan to Fight ISIL
While in Baghdad, the US lawmakers met with Iraqi Prime Minister Haider al-Abadi, Speaker of the Council of Representatives of Iraq Salim al-Jabouri, the US Ambassador to Iraq Stuart Jones and the commander of the Combined Joint Task Force-Operation Inherent Resolve against the Islamic State Lt. General James Terry.

“The United States must carefully manage the mission to degrade and ultimately defeat ISIL to ensure it does not come at the expense of ceding Iraq’s strategic independence to Iran, which does not seek to keep the country whole,” Boehner said in the statement.

On Friday, Boehner and the Republican lawmakers started their trip off to England where they met Chancellor of the Exchequer George Osborne, and then went to Jordan on Sunday to meet with King Abdullah II.

© REUTERS / Jonathan Ernst/Files
Iraq, Syria Need to Defeat Islamic State - US Defense Secretary
According to media reports, Boehner is also expected to visit Israel, but the visit has yet to be announced because of security concerns.

The Republican lawmakers’ visit comes as Iran and the P5+1 group of negotiators from Russia, China, the United States, France and the United Kingdom plus Germany, try to reach an agreement on guaranteeing that Tehran will maintain a peaceful nuclear program — one that Israel has continuously disproved.

The deadline for reaching an agreement on the political framework of the deal was set for midnight on Tuesday, March 31, but has been extended until Wednesday.

Meanwhile, the final deadline on reaching agreement has been postponed several times, with the most recent set for July 1, 2015.

US Approves Sale of Patrol Boats, Weapons to Jordan to Fight ISIL