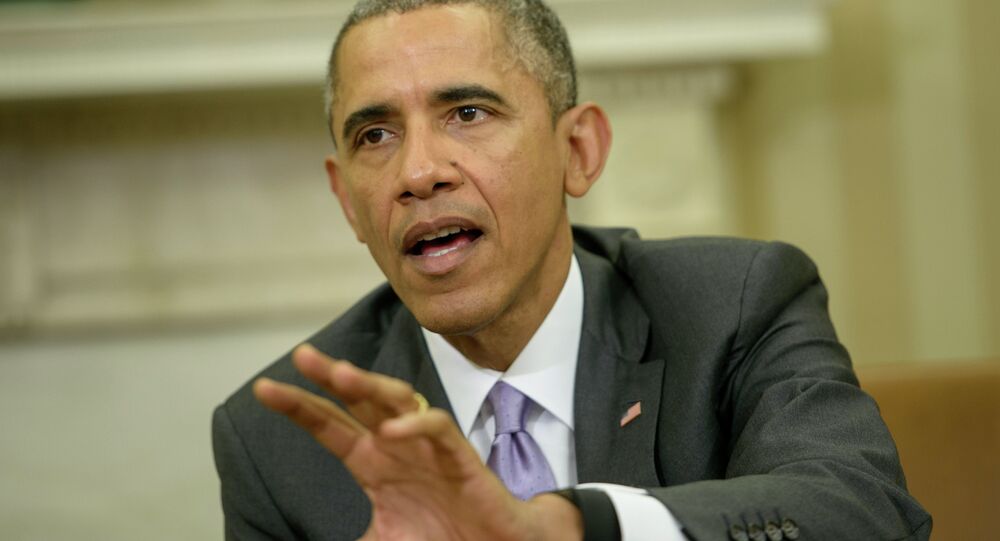 US President Barack Obama commented on the Netanyahu's statements on the creation of a Palestinian state, saying that the Israeli Prime Minister has not presented a prospect of a meaningful framework leading to a sovereign state.

© AP Photo / Khalil Hamra
Israel Supported Hamas to Divide Palestine's Resistance - Assange
WASHINGTON (Sputnik) — Israeli Prime Minister Benjamin Netanyahu has not offered a framework leading to a sovereign Palestinian State in the near future, despite having acknowledged his misleading comments on opposing a two-state solution to the Israeli-Palestinian conflict, US President Barack Obama said at a press conference.

Prior to the March 17 Israeli elections, Netanyahu had said he would oppose the creation of a Palestinian state if reelected.

Following Netanyahu’s reelection, the Prime Minister said he did not oppose the creation of a Palestinian state, but a series of conditions must be satisfied before such a state could be created.

© East News / UPI Photo / eyevine
Change of Tone? White House Chief of Staff Says 50 Years of Israeli Occupation Must End
“Even if you accepted… the ‘corrective’ of Prime Minister Netanyahu in subsequent days, there still does not appear to be a prospect of a meaningful framework established that would lead to a Palestinian state even if there were a whole range of conditions and security requirements that might be phased in over a long period of time, which was always the presumption,” Obama stated.

Responding to Netanyahu’s misspeak, Obama said that in public diplomacy you cannot “pretend that there’s a possibility of something that’s not there,” and on “something that everybody knows is not going to happen at least in the next several years.”

“The conditions were such that they would be impossible to meet anytime soon,” Obama said.

Obama stressed that the United States is still committed to achieving a two-state solution to the Israeli-Palestinian conflict and will continue intelligence and military cooperation with Israel.

Palestinians Should Change Tack on Statehood Bid, Team Up Against Israel