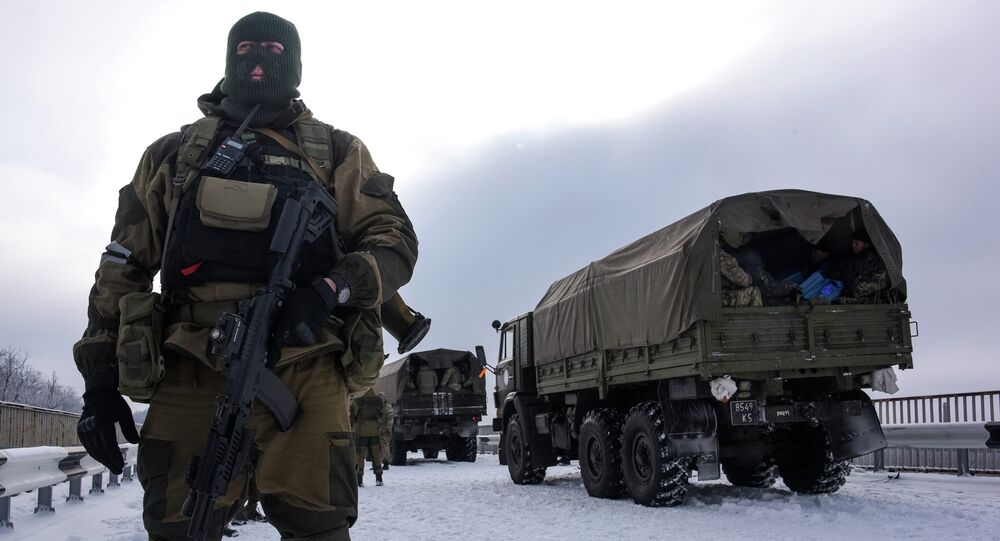 It was clear from the beginning of the conflict in eastern Ukraine that the political solution was not in Kiev's plans, Russia's envoy to the OSCE said.

© AP Photo / Sergei Grits
Kiev Using Western Lethal Arms, US War Tactics in Donbas
MOSCOW, February 4 (Sputnik) — The current developments in eastern Ukraine point out at renewed efforts by Kiev regime to resolve the standoff with self-proclaimed republics in Donbas by force, Russia's envoy to the Organization for Security and Cooperation in Europe (OSCE) said Wednesday.

"It was clear from the beginning of the conflict [in eastern Ukraine] that the political solution was not in Kiev's plans. What Kiev really intended to do was to squash [the pro-independence movement in Donbas] and to resolve the issue by forcible methods…," Andrei Kelin said in an interview with Rossiya-24 television.

"They have failed the first time…and now we are witnessing the second attempt," kelin stressed.

A few hours prior to Kelin's interview, officials in the breakaway Donetsk People's Republic (DPR) capital reported uncovering Kiev's plans to attack civilian targets in the town of Debaltsevo, ahead of this week's Munich Security Conference.

According to DPR officials, the Ukrainian leadership planned to discredit DPR and brand it as a terrorist organization at the conference scheduled to take place on February 6-8.

Poltorak's claims have subsequently been confirmed by DPR leader Alexander Zakharchenko, who on Monday attributed the surge in violence to last week's failed Contact Group negotiations on Ukrainian reconciliation.