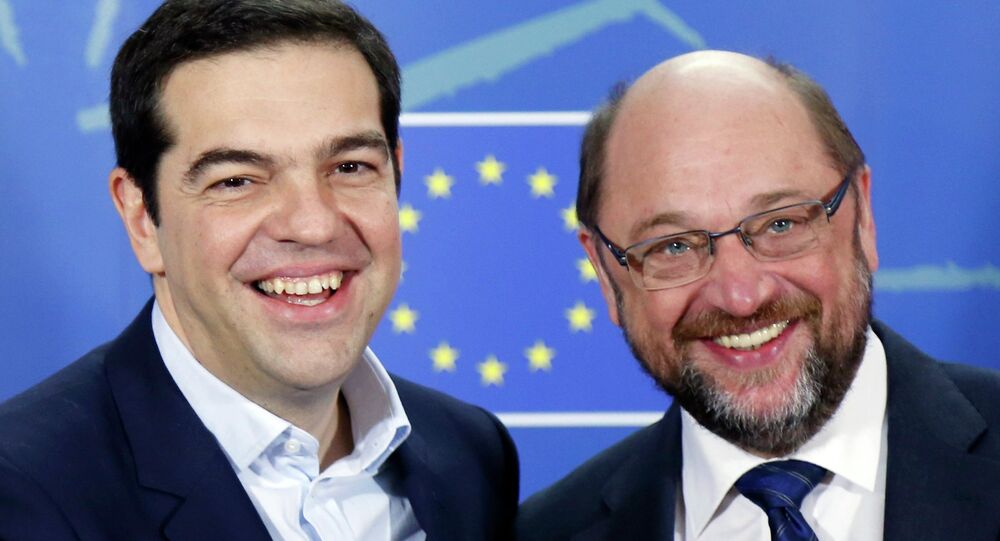 Prime Minister Alexis Tsipras said that Greece respects EU regulations and was willing to "recorrect" the framework of its relations with the bloc rather than "smash" it.

BRUSSELS (Sputnik) — Greece intends to find a solution to its problems within the framework of the European Union, Prime Minister Alexis Tsipras said Wednesday.

#Schulz: PM #Tsipras is looking for European co-operation not for separation and this is the right way. pic.twitter.com/Mh4EJkZCQh”

"I'm very optimistic that we'll try to do our best in order to find the common, viable, mutually acceptable solution for our common future," Tsipras said at a joint press conference with European Parliament President Martin Schulz.

A PM travelling EU is a PM figthing for cooperation not separation My door always open @PrimeministerGR @atsipras pic.twitter.com/B8fzNdLqkZ

He said that Greece respects EU regulations and was willing to "recorrect" the framework of its relations with the bloc rather than "smash" it.

© REUTERS / Marko Djurica
Finance Minister Promises to Release Greece From Debt Bondage
"I know very well that the history of [the] European Union is a history of disagreements, but, at the end of the day, of compromises, of agreements. And we have the willingness to work in this direction, to work in order to find a mutually acceptable agreement and compromise for our common future," Tsipras said.

Schulz stated he was very optimistic about future cooperation with the new Greek government, especially now that Tsipras is reaching out to Europe.

"The prime minister of Greece traveling around Europe, meeting governments, meeting the European institutions today – that's a prime minister fighting for European cooperation and not for Greek separation, and this is a very strong and good signal," Schulz said.

© REUTERS / Alkis Konstantinidis
Syriza Cites Greece’s Struggle for Economic Growth as Example for EU
The newly-elected prime minister paid a visit to Brussels on Wednesday to discuss issues common to the EU and Greece, including the country's immense debt. Greece owes over $270 billion to a "troika" of international creditors, comprising the International Monetary Fund, the European Union and the European Central Bank.

Tsipras and his leftist Syriza party won his country's general election in January on a wave of Euroscepticism, vowing to renegotiate bailout conditions with the troika and end unpopular austerity measures.