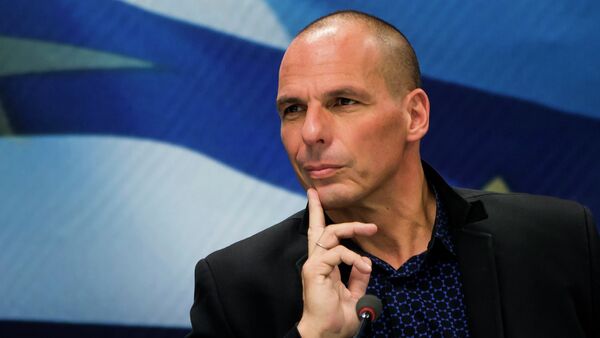 Finance Minister Yanis Varoufakis vowed to resort to every measure to stabilize the national debt and open the growth prospective for Greece.

"If we will need to use euphemisms and financial-credit instruments and mechanisms to take Greece out of debt bondage, we will do it. There is only one meaning. Greek national debt will stabilize, open the growth perspective and Greek people will finally be able to breathe," he said in a statement.

On Monday, Varoufakis told the Financial Times newspaper that the Greek government plans to swap outstanding debt for new growth-linked bonds, instead of its pre-election call for a headline write-off of all its foreign debt.

Germany vs Greece: Merkel Says 'Nein' to Greek Debt Negotiation
Last week, Varoufakis hired US investment bank Lazard to advise Greece on its debt issue. A day before, a Lazard representative called for a 50 percent write off of Greek debt. The bank assisted Athens in restructuring the country's private debt in 2012.

The new left-wing government of Greek Prime Minister Alexis Tsipras, which took over after the January 25 election, has vowed to revise Greece's highly unpopular austerity measures.

During his first cabinet meeting, Tsipras said that he plans to negotiate the country's $270 billion bailout debt with its creditors.