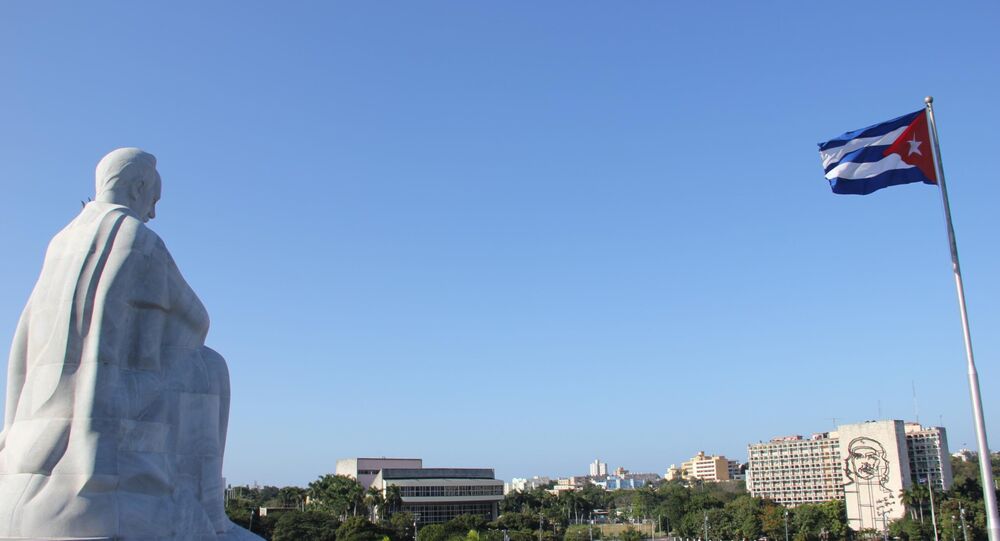 US-Cuban Relations in Facts and Details

Tension in Cuban-US relations came to a head with the Caribbean Missile Crisis, when Soviet nuclear missiles were deployed in Cuba, targeting the US. In February 1963, the US adopted the Cuban Assets Control Regulations. Restrictions became the principal US policy lever with regard to Cuba.

© REUTERS / Larry Downing
Obama Announces Major Shift in Cuban Policy, US Plans to Open Embassy in Havana
MOSCOW, December 17 (Sputnik) — Before the 1959 Revolution, Cuba's economy was closely tied to the US economy.

During the seven years preceding the revolution, US companies took $800 million worth of profits out of the country. Other sectors were sacrificed to sugar production for the US market. As a result, Cuba turned into an importer of essential foodstuffs, consumer goods and raw materials.

Cuba was also tied to the US by close military and political cooperation. The US naval base in Guantanamo has been deployed in Cuba since 1903.

© Flickr / Phil Roeder
US Vows to Restore Economic Ties With Cuba, Re-Establish Embassy in Havana
US influences in the media, education, ideology and culture were unprecedented in their scale.

Cuban-US ties began to sour almost immediately after Fidel Castro came to power. Changes brought about by the revolution began in May 1959: private land holdings were expropriated and US-owned sugar plants, telecoms and electric power plants were nationalized. In September 1960, the Cuban branches of North American banks were nationalized. The revolutionary authorities rejected all offers by the United States to settle property disputes. The US retaliated by stopping oil deliveries to Cuba and the purchase of Cuban sugar.

On January 2, 1961, the US broke off diplomatic relations with Cuba.

In April 1961, the United States sponsored the landing of 1,500 armed Cuban opposition members in the Bay of Pigs. The operation failed and the invading force was defeated.

In January, 1962, Washington insisted on Cuba's expulsion from the Organization of American States. All Latin American countries except Mexico caved in to the US demands and broke diplomatic and economic relations with Cuba. The US considered the possibility of direct military intervention on the island.

Tension in Cuban-US relations came to a head with the Caribbean Missile Crisis, when Soviet nuclear missiles were deployed in Cuba, targeting the US.

© AP Photo / James L. Berenthal, File
Cuba Releases American Alan Gross After Five Years in Prison
In February 1963, the US adopted the Cuban Assets Control Regulations. Restrictions became the principal US policy lever with regard to Cuba. In 1966, US citizens were prohibited from traveling to Cuba.

In the 1960s and 1970s, Fidel Castro's government pursued a policy of confrontation with the US and its allies.

In the late 1970s, the US eased travel restrictions for US citizens visiting Cuba and for Cubans visiting the US, while Cuban emigres were allowed to visit their homeland.

On May 30, 1977, the US and Cuba agreed to exchange permanent but low level diplomatic missions called interest sections from September 1 of that year.

International developments during the 1990s gave Cuban-US relations a boost. US lawmakers and public figures started traveling to Cuba more frequently. In early 2002, Fidel Castro met with a large group of US lawmakers and business people, who later said they were prepared to sponsor bills to lift the embargo. All of this contributed to a warming of relations between the two countries.

The Cuban government condemned the September 11, 2001 terrorist attacks in New York and Washington.

In May 2002, former US President Jimmy Carter visited Cuba, proposing a four-point plan for the normalization of bilateral relations: lifting the Cuban travel restrictions; lifting the embargo; adjusting property disputes that resulted from the nationalization of US property after the 1959 Revolution; and using the Cuban diaspora in the US as a bridge for a rapprochement between the two countries.

© AP Photo
US Agency Tried to Stir Political Dissent in Cuba Using Rappers: Reports
During the presidency of George W. Bush, despite the embargo, which was still in force, the farming lobby in the US Congress secured permission for agricultural sales to Cuba.

President Barack Obama has repeatedly spoken about a new approach toward his country's relations with Cuba, and suggested that the US could revise the sanctions against Cuba.

On December 10, 2013, Cuban leader Raul Castro met Barack Obama at Nelson Mandela's funeral service, and shook hands with him. That was the first time since the 1959 Revolution that the two countries" leaders had met in person.

In June 2014, the Uruguayan publication Busqueda, citing sources in official circles, reported that Uruguayan President Jose Mujica had delivered a message from Obama to Castro. Castro said he was prepared for a rapprochement with Washington but only if the US did not try to impose its will.