The former US ambassador to Syria has expressed skepticism about Russia's proposed peace talks on Syria, adding that the prerogative of Russia in resolving the Syrian conflict is to maintain the Assad government "without any preconditions".

"The Russians are playing a very, very malign role in Syria, despite the recent pronouncement by the Kremlin…of a political solution," DOD strategic communications advisor to the National Coalition of Syrian Revolution and Opposition Forces, Oubai Shahbandar said Friday.

© East News / AP
US Senator Urges Obama Not to Send Troops to Syria
Speaking at the Middle East Institute, Shahbandar claimed that the Russian prerogative is to maintain the Assad government "without any preconditions", while also maintaining current security contracts with the Syrian government".

Meanwhile, former US Ambassador to Syria, Robert Ford, said it is a "big question" whether or not the Russian initiative "will produce enough of a change in Damascus that the people fighting the regime in Damascus would accept to stand down".

Ford also said that, in his opinion, Russia does not "fully understand that there has to be a political angle, as well as a security angle" is resolving the situation in Syria. 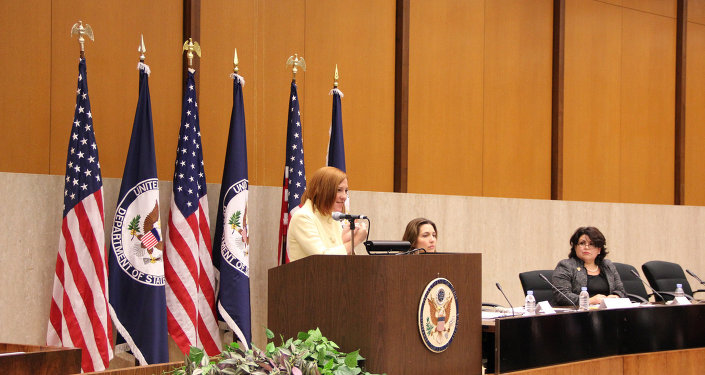 © Flickr / Exchanges Photos
More Details Needed on Moscow’s Proposed US-Syrian Meeting: State Dep't
On Tuesday, Russian Foreign Minister Sergei Lavrov said that Washington should coordinate the fight against Islamic State (IS) militants in Syria through direct contacts with the government of Syrian President Bashar Assad. Lavrov stressed that it was impossible to fight terrorism successfully on a territory of a sovereign state without a proper coordination of actions with the legitimate authorities of that state.

Russian Deputy Foreign Minister stated on Wednesday that if Syrian officials wanted to meet in Moscow, he would discuss the issue with the United States. Meanwhile, the White House maintains its position that there must be a political transition in Damascus as part of the "endgame" for stability in the region.

IS is a radical Sunni group that has been fighting the Syrian government since 2012, having also spread its activities to Iraq.

The United States is currently leading an international anti-IS coalition, which has been conducting airstrikes in Syria and Iraq since September. US anti-IS efforts also include training and equipping Syrian rebels.

US Trains, Equips Syrian Opposition to Start Fighting IS in 2016: Official