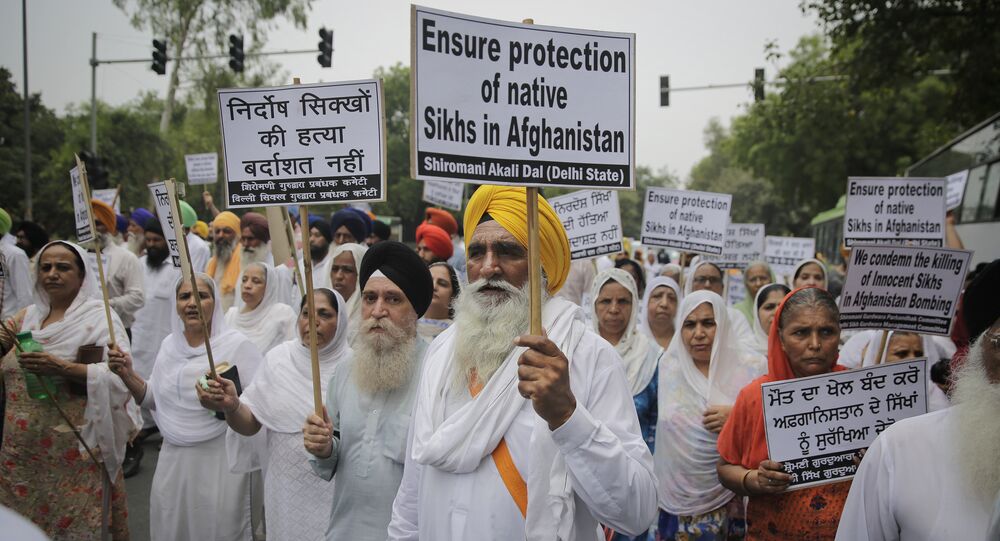 New Delhi (Sputnik) — At least 19 people, mostly Sikhs, were killed in a suicide bombing in Jalalabad, Afghanistan. Awtar Singh Khalsa, the only Sikh candidate running for the upcoming elections, was among the dead. The terrorist group Daesh has claimed responsibility.

#BREAKING: In an unprecedented development, Afghan diplomats participate in the protest by Sikh community in Delhi against terrorism after 19 were killed (mostly Sikh leaders) and 21 injured in Jalalabad city. Afghan diplomats assure them of speedy justice. Kudos @ShaidaAbdali pic.twitter.com/QNDd8QqybG

Hundreds of protesters gathered outside the High Commission of Afghanistan in New Delhi holding placards demanding justice for those killed in Sunday's suicide bombing.

#Sikhs protests in #Delhi #India, after 17 members of #Afghan Sikh community killed in a #ISIS claimed suicide attack in #Jalalabad city of #Afghanistan.
Photos thanks to @sidhant pic.twitter.com/AvY7bp2Sms

"Sikhs are the Ambassadors of peace across the globe, why killing of innocent Sikhs?" One of the placards read.

Protest in Delhi outside #Afghanistan embassy to ensure safety of sikhs. pic.twitter.com/hENBsQJhT0

Some protesters demanded that the government of India should provide refuge to  Sikhs if the Afghan government fails to ensure their security.

"The casualties should be compensated by the Afghanistan government. We request that the Indian government provide citizenship to our people and relocate them to India," the protester told ANI.

Earlier on Monday, a delegation of Afghan refugees living in Delhi called on Minister of External Affairs Sushma Swaraj and sought her intervention to facilitate the travel of those Sikhs who want to leave Afghanistan and come to India.

Condemning the suicide attack in Afghanistan that killed 13 members from the Afghan Sikh community, EAM @SushmaSwaraj expressed sincere condolences during her meeting with a delegation of representatives of SGPC, Sikh community from Afghanistan and relatives of the victims. pic.twitter.com/iTlCkIX326

Sikhs practice a monotheistic religion that originated in the 15th century and are historically associated with the state of Punjab in northern India, where they constitute the majority.