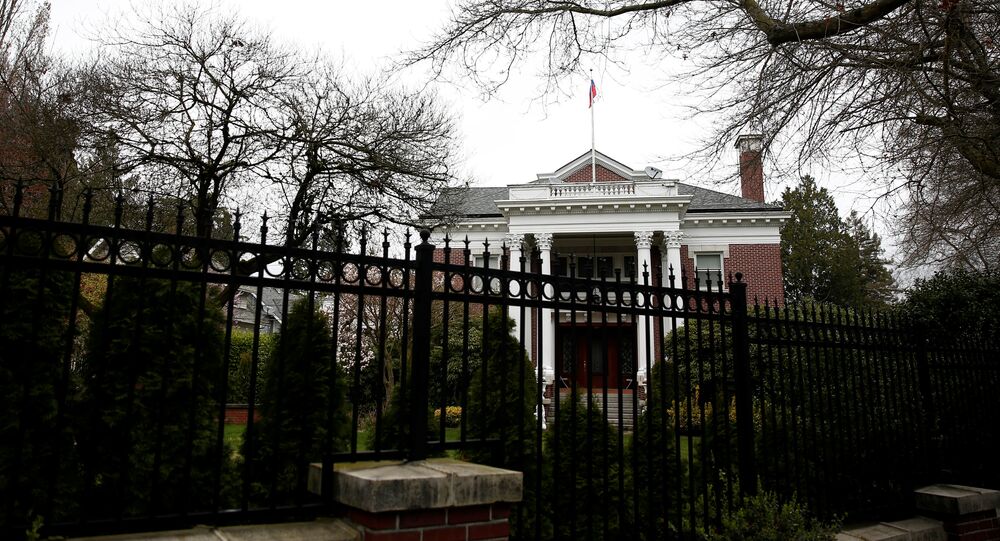 SEATTLE (Sputnik) - Earlier, a Sputnik correspondent reported that US law enforcement representatives began patrolling outside the closed residence of Russia’s Consulate General in Seattle at around midnight local time on Tuesday.

The US authorities entered the premises of the closed residence of Russian Consul General in Seattle after breaking locks on the main gate, according to the reporter.

The Russian embassy in a comment to Sputnik slammed the US authorities' actions as 'unfriendly move,' adding that Russian diplomats are monitoring the situation. The decision on a response to the US steps will be made later, according to the embassy.

Earlier on Wednesday, two vehicles arrived a little before midnight, the deadline for the Russian diplomats to leave the residence as ordered by the US government. The cars were parked on the side of the residence. The people in one car were wearing regular clothes, while the man in the second car was wearing a law enforcement uniform.

Russian Senior Consul Halit Aisin told Sputnik on Tuesday that power and gas in the facility had been cut off before the diplomats left the city. All Russian diplomatic personnel left Seattle on Tuesday morning, and headed to Washington D.C., where they are expected to arrive on May 3. The diplomats locked the residence, but retained the keys because the facility is the property of Russia.

© Sputnik / Alexei Danichev
'Vse Budet Khorosho': WATCH US Diplomats Expelled From Russia Tell What They Leave Behind
On March 26, US President Donald Trump ordered the expulsion of 60 Russian diplomats and the closure of the Russian Consulate in Seattle over allegations about Moscow's involvement in the poisoning of former Russian intelligence officer Sergei Skripal and his daughter Yulia in the United Kingdom. Russia has strongly and repeatedly denied involvement in the case.

When the Russian Consulate General closed before the April 1 midnight deadline set by the US government, all material objects and documents were transferred to the residence of the Consul General. The US government had demanded that Russian diplomatic staff leave the residence before midnight on April 24.

In early September 2017, Russian diplomats lost access to several diplomatic properties when US authorities ordered the closure of the Russian Consulate General in San Francisco and trade missions in New York City and Washington, D.C. US officials said the move came in response to Moscow's decision in late July to reduce the number of US diplomatic staff in Russia to 455 people, the same number of diplomatic personnel Russia had in the United States. The US authorities also removed the Russian flags from the seized Russian diplomatic buildings and later returned them to the Russian side.

Moscow said that the actions of the United States constituted a violation of international law, including of the Vienna Convention on Diplomatic and Consular Relations.