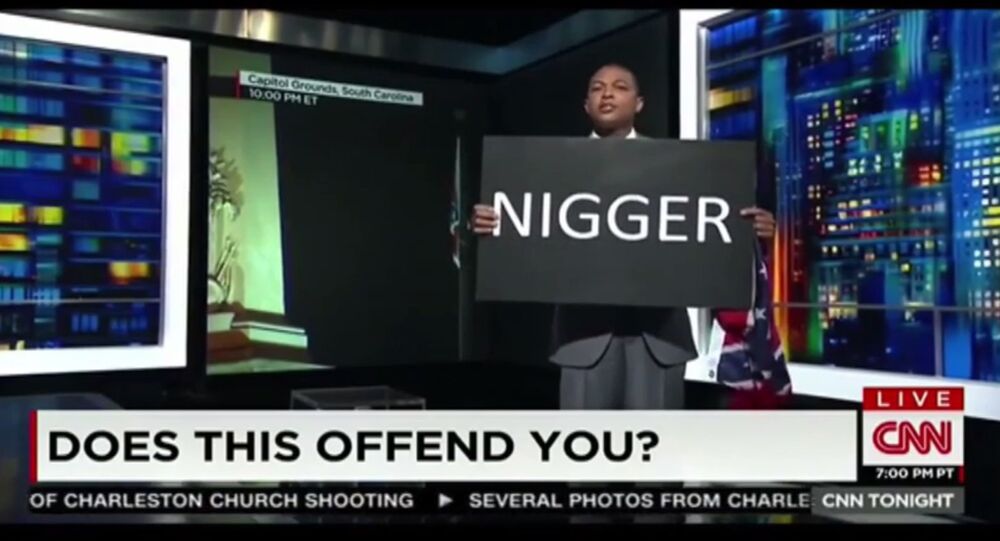 As the nation mourns and US officials struggle to address the massacre of nine black churchgoers by a white supremacist terrorist, the television media is going to greater and greater lengths to grab viewers' attention. And then there's CNN's Don Lemon.

Gawker dubbed him a "bad idea factory," Slate says he's "among the very worst," the Root called him "the gift that keeps on giving" and the Guardian wondered if he's "the most aptly named man on TV".

Yup. Don Lemon is all over your newsfeed again, and that's never a good sign.

After President Barack Obama used the “N-word” in a frank conversation about race and the shootings in South Carolina with comedian Marc Maron for a podcast interview, an instant brouhaha erupted over the appropriateness of the word, largely from conservative pundits eager to pin the Democrat for impropriety.

Don Lemon decided to address the controversy on his program Monday night — and to equate it with the newly energized opposition to the use of the confederate flag. So he held up a flag and asked his viewers if they were offended by it. Then he held up a sign with the N-word, and that's when Twitter exploded.

In a moment tailor-made for photoshop, the memes started rolling in.

Television news is known for its forced, groan-inducing segues, and for resorting to cheesy props in search of "engaging visuals." This segment intro was a good illustration of both.

Uniting discussions about both the Confederate flag and the president's use of the N-word does imply some sort of equivalence. The common thread is that both have to do with race, and that people have taken offense. But that's about it.

The comparison masks important differences — that the flag is a symbol that offends large swathes of the population — not only African-Americans at large but other anti-racists.

The president's use of the word was not in a context of insult, and offended a few, mostly white, right-wing pundits and racist trolls, who are not even the people who would be the target of the slur in question, which calls into question the sincerity of their offense-taking.

Like a case study for Bad Journalism 101, the equivalence of the two elevates the outrage of white conservatives who routinely rail against the President for any reason at all to the injustices suffered by a whole population over centuries.

But social media, especially #blacktwitter, lost no time in skewering the CNN host, a public figure whom, especially while covering issues of race, many viewers love to hate.

Some tried to bring the conversation back to more substantive issues of race relations than one word in a presidential interview.

Others took a chance to jab at Lemon himself, often viewed as tone deaf in discussing race issues.

From Race to Rape, Don Puts His Foot in His Mouth

"Both in Ferguson, Mo., and Charleston, SC, protesters, bystanders, potential interviewees have brazenly come up to the camera and called [Lemon] an Uncle Tom," Georgetown University journalism professor Chris Chambers pointed out to Sputnik.

"Not because he has nakedly embraced some Fox News position but precisely for the stunts like the cards, for posing offensive rhetorical questions and false equivalencies."

In another viral social-media-fodder moment, Lemon was confronted by a woman on the streets in Charleston who, during a live shot, heckled him as an "Uncle Tom," asking if he was as mad about the shootings as black people in her community, and generally giving voice to a lot of frustration over his, and mainstream media's, coverage of events.

Back in February, while covering the unrest in Ferguson, Mo. over racist police violence, Lemon invoked the wrath of social media when he came off as rude to guest, Talib Kweli. The rapper and activist was critical of media coverage and Lemon cut him off repeatedly as he tried to explain himself.

But race hasn't been the only stumbling block for Lemon. The reporter also drew heat for a conversation with one of the many women who have come forward accusing Bill Cosby of sexual assault. He questioned her story by positing that, if she had wanted to avoid being forced into oral sex while intoxicated, she could have bitten Cosby.

Comparing Lemon to other black journalists who "injected themselves to dangerous and compelling items," Chambers says, "he really didn’t."

"He might be the gay black equivalent of William Hurt in the old 'Broadcast News' yet without that character’s fake gravitas."

Par For The Course in 24-Hour News Cycle

Asked whether the recent stunt was an example of increased editorializing in news coverage, Chambers responded that it's more a question of newsroom dynamics.

"I think it’s evidence of a lack of diversity and tone deafness in the CNN newsroom, from the bosses to producers. Mix that with the stated goal of making news exciting and you have a recipe for abuse," Chambers said, noting that Lemon is succeeding well in that world.

"Now that everyone wants to do news on the cheap, cut bureaus, curate weird viral stories rather than collect and report-out real news, he fits perfectly in that model."

"He fills that niche as minstrel in the purest sense—entertainer appealing to the comedy, not the pathos or ethos, of the largely white audience," Chambers continued.

And the bad coverage by CNN — while not as bad as, say Fox News — is still pretty typical of American mainstream media.

"American network news don’t do allegory very well," Chambers explained. "There is fixation on the Confederate flag rather than the history, atmosphere, sociology, culture, economy, violence, oppression it is allegory for."

This is CNN: Network Deprives United Kingdom of its Name on Election Night

Banished to MSNBC: Brian Williams to Come Back On-Air After Suspension