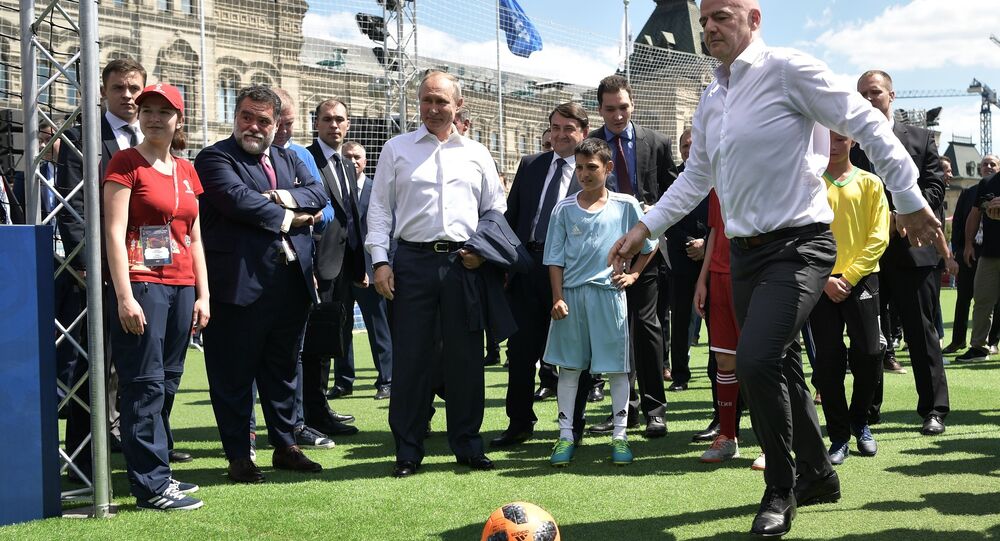 It seems that the World Cup spirit has reached the president of the host country, Vladimir Putin, as he took on FIFA head Gianni Infantino at a football pitch.

At first, Putin and Infantino examined the FIFA sponsor’s pavilion, where the FIFA World Cup Winner's Trophy was displayed. But then they got a chance to show off their skills as they visited the football park in Moscow’s Red Square. Eventually, they played out a 1-1 draw and later played a bit with kids: as Infantino passed Putin the ball, the latter tried to score, but was stopped by a young goalkeeper.

Former Brazil striker and football legend Ronaldo was among the spectators watching Putin, dressed in a suit, take the shot.

Later, Infantino told reporters that the world was watching the “fantastic” World Cup in Russia and highly praised the "great matches and perfect organization" of the tournament, with people "from around the world celebrating together” in the streets of Moscow.

Ahead of Putin’s visit to the pitch, the Kremlin's spokesperson announced that he would appear at the opening of the park, which hosts master classes and autograph sessions with foreign and Russian football players, just outside his office.

"The theme park has already travelled to the cities hosting World Cup matches, and now it opened in Moscow for the time of the tournament," the spokesperson said.