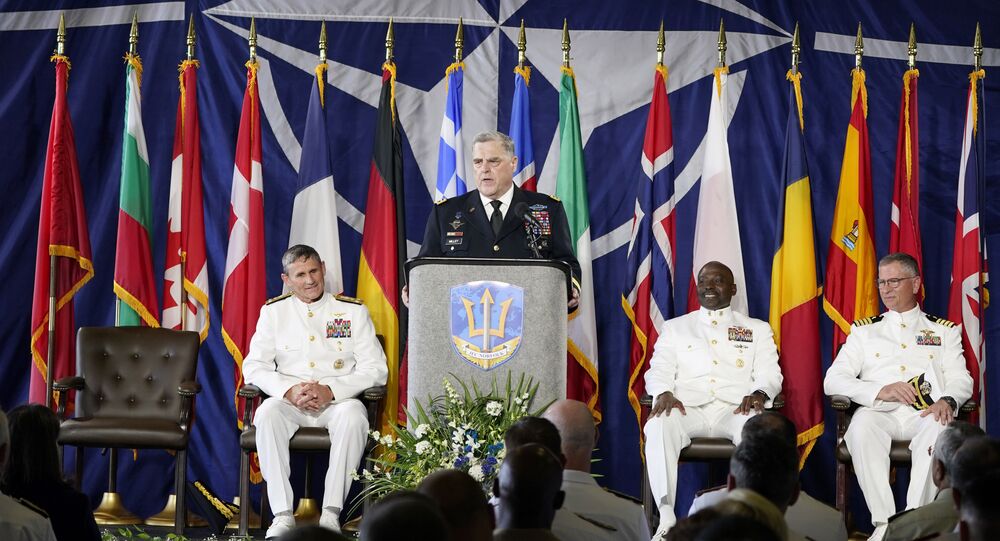 Biden's administration has continued his predecessors’ strategy of pushing Russia and China closer together via a hostile US sanctions policy and military manoeuvres near the two countries’ borders.

Joint Chiefs of Staff Chairman Gen. Mark Milley has warned of the dangers of a new global conflagration between the great powers while touting the Western alliance’s ability to stop such a scenario from becoming a reality.

Speaking at the inauguration of the new NATO Joint Force Command Norfolk, a joint operational command tasked with tackling a ‘Resurgent Russia’ in the Atlantic, on Thursday, Milley warned that JFC-NF’s mission in the event of war would be to “fight the Battle of the Atlantic.”

“In my view, the world is entering a period of potential instability, as some nations – not all, but some – and clearly terrorist groups and perhaps some rogue actors are seeking to undermine and challenge the existing international order. And they seek to weaken the system of cooperation and collective security that has been in existence for some time,” Milley added, without mentioning which “nations” specifically he was referring to.

Recalling World War II, “the bloodiest war in human history,” and the First World War which preceded it, Milley estimated that some 150 million people around the world were killed in or as a result of the two conflicts.

Detailing US casualties on the Western Front in WWII, Milley suggested that these losses were “the butcher’s bill of great power war,” and said that “that’s what this international order that’s been in existence for seven and a half decades is designed to prevent. That’s what JFC Norfolk is all about, is to prevent that outcome.”

The “international order” Milley referred to is likely an allusion to the conferences held between 1944-1945 by the leaders of the Allied nations, which led to the creation of the United Nations and the formation of a postwar order aimed at preventing a great war from ever happening again.

© Wikipedia
Stalin, Truman and Churchill at the Potsdam conference in July 1945

Senior Russian officials, including President Vladimir Putin and Foreign Minister Sergei Lavrov, have also spoken repeatedly of the post-WWII international order, but have recently accused the US and its allies of attempting to destroy the post-war order by questioning Moscow’s role in victory, and by expanding NATO up to Russia’s post-1991 borders.

In his remarks Thursday, Milley suggested that NATO must continue to adapt to changes in the “character of war,” including “the organisations we fight with [and] the technology we use,” and to maintain military superiority against potential adversaries, to prevent the generation 10-15 years from being “condemned” to “what happened 76 years ago.”

© AFP 2021
Pentagon Report Warns of Looming Danger of Nuclear War as Major Powers, Others Expand Arsenals
In his own comments at Thursday’s ceremony, Vice Adm. Andrew Lewis, the commander of the US 2nd Fleet now assigned to command JFC-NF as well, warned of increased Russian submarine activity in the Atlantic and the Arctic as a challenge to the West following its post-Cold War ‘victory’.

“We are again being challenged by threats in these waters. [Russia and China] both have increased their presence in the Atlantic, from the Arctic Circle to the South Pole,” Lewis said. In such a situation, he lamented, NATO “can no longer assume we have control over the Atlantic, as we had at the end of the Cold War.”