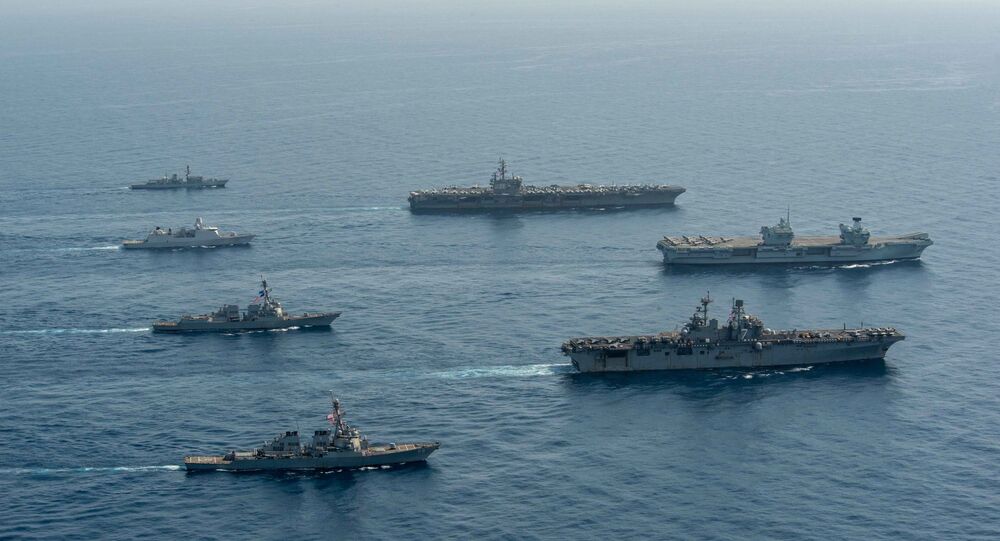 The largest warship the United Kingdom has ever sailed, the HMS Queen Elizabeth, is intended to cement the declining colonial power’s place in 21st century geopolitics and signal that London is a reliable partner for the United States, even as the UK has pulled out of other agreements, such as the European Union.

The British Royal Navy’s HMS Queen Elizabeth has linked up with a US aircraft carrier and amphibious assault ship for joint drills in the Gulf of Aden as the UK flagship continues its maiden patrol toward the South China Sea.

The British aircraft carrier, and its Dutch Royal Navy escort, the frigate Eversten, met up with the Ronald Reagan carrier strike group in the western Arabian Sea on Monday for a “large scale joint interoperability exercise,” according to a Pentagon news release.

Also sailing in the joint task force were a Duke-class frigate, two Arleigh Burke-class destroyers, a Ticonderoga-class guided missile cruiser, and the Wasp-class landing helicopter dock USS Iwo Jima, itself a form of aircraft carrier, albeit also armed with thousands of US Marines and their amphibious assault equipment.

Together, the force could put nearly 150 aircraft into the air, many of them variants of the F-35 Joint Strike Fighter. Some of the jets on the Queen Elizabeth are piloted by US Marines, which deployed with the warship on its first patrol, so that the warship will have a full complement of aircraft. London has only received a handful of the 48 F-35Bs that it has ordered.

The drills are being carried out close to several important regions, including Yemen, where a Saudi-led coalition is locked in a six-year-long war with the Shiite Ansarullah movement; Somalia, where the US has been fighting the terrorist group al-Shabaab; and Ethiopia, where Washington has recently said the struggle by Ethiopian and Eritrean forces against the Tigray People’s Liberation Front amounts to “ethnic cleansing.” It’s also not far from Iran or Afghanistan, the latter of which First Sea Lord Admiral Tony Radakin noted in May the Queen Elizabeth’s aircraft could bomb if necessary.

The Queen Elizabeth is on its way to the Pacific Ocean, where it will be “flying the flag for Global Britain - projecting our influence, signalling our power, engaging with our friends, and reaffirming our commitment to addressing the security challenges of today and tomorrow,” as British Defense Secretary Ben Wallace described the deployment in April.

Based in Yokosuka, Japan, the Reagan is also typically confined to Pacific waters, but has come westward to provide additional cover for US troops amid the final withdrawal from Afghanistan, which is expected to be complete next month.

With its signature dual command islands, the Queen Elizabeth isn’t quite the size of the massive Nimitz-class warship it was sailing alongside, but is still considered one of the most formidable warships afloat and significantly larger than any carrier previously used by the British Royal Navy.

“The aircraft carrier is the ultimate expression of global maritime power,” UK Royal Navy Commodore Steve Moorhouse, commander of the carrier’s strike group, said in the news release. “Queen Elizabeth, Ronald Reagan, and Iwo Jima symbolize the might of the US and UK partnership, and the ease with which our naval and air forces can combine here in the Gulf of Aden, or anywhere else in the world.”

However, heading to the Pacific, the Queen Elizabeth will soon be in the waters of a dangerous adversary: China’s People’s Liberation Army, which has long worked to perfect an arsenal of ultra-long-range anti-ship missiles and hypersonic weapons capable of overwhelming the carrier’s - or indeed, any warship’s - defenses and delivering a knockout blow.

While London has given its support to the sovereignty-challenging “Freedom of Navigation Operations” performed by the US and other nations in the South China Sea, Wallace said the carrier’s deployment was not intended to be “provocative,” but would indicate London’s willingness to “play an active role in shaping the international system of the 21st century.”