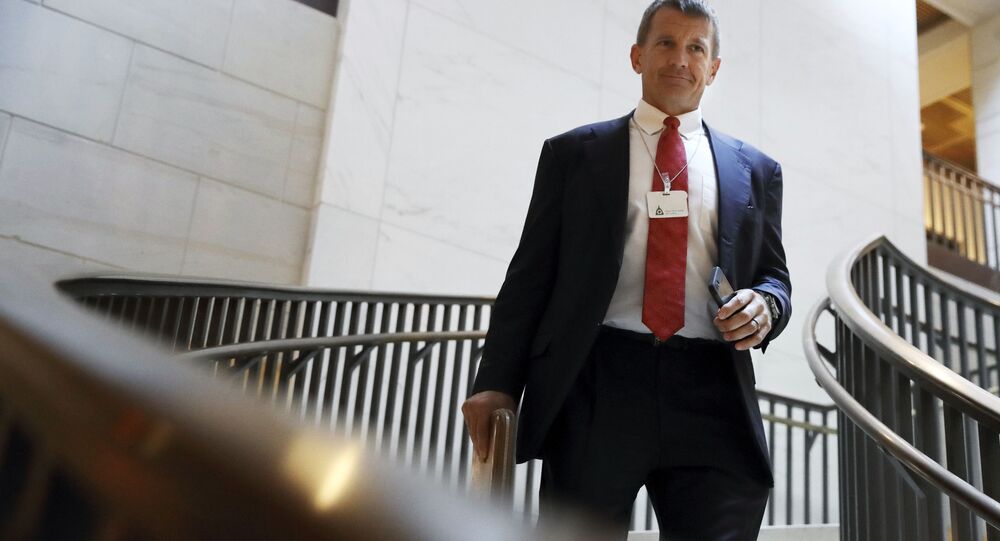 Prince's ambitious plans for the Eastern European country reportedly failed to come true mostly because former US President Donald Trump did not win a second term in the White House, as he was deemed to be closely affiliated with the ex-commander-in-chief.

Prince, who re-branded his US-based defense contracting company as Academi, allegedly planned on creating a "vertically integrated aviation defense consortium" in Ukraine that could bring in an estimated $10 billion, the report said on Wednesday, citing interviews with close associates and confidential documents. He hoped the factories could make engines for fighter jets and helicopters, according to the report. Prince also envisioned the consortium competing with top industry figures like Boeing and Airbus, the report added.

At the same time, the Ukrainian authorities were reportedly suspicious of the fact that Prince relied in his deals on politicians Andrei Derkach and Andrei Artemenko, against whom a criminal investigation is being conducted in the United States and who were suspected of being tied to alleged Russian interference in the US election — which has been dismissed by Moscow as lacking any evidence.

Talks with his Ukrainian business partners began in 2014, shortly after the Crimea reunification, the report said. They thought they could leverage the aviation technology in negotiations with Russia, according to the report.

In February 2020, Prince reportedly met with his Ukrainian associates at an unusual location — the Vodka Grill nightclub (which no longer exists) next to a KFC restaurant. Igor Novikov — ex-top aide to the Ukrainian president, apparently knew little of the American billionaire apart from his private military company's war crimes in Iraq, as he reportedly wondered, "What does this guy want from us?"

"It soon became clear that Prince wanted a lot from Ukraine," Time writes.

It is also mentioned that Prince's family was favored by the administration of former president Donald Trump, as Prince's sister, Betsy DeVos, was appointed Secretary of Education, and the Blackwater founder himself pressed for lucrative contracts, including his lobbying for the privatization of the war in Afghanistan. Prince said his idea was based on the British East India Company model, a reference to the days of UK colonial rule.

At the same time, the private security mogul is claimed to have been acting on behalf of the US government, and is referred to in the mainstream media as a 'Trump donor'.

"Had it been another four years of Trump, Erik would probably be closing the deal," Novikov reportedly noted.

© AFP 2021 / BRANDON BELL
Former President Donald Trump looks on before speaking during a tour to an unfinished section of the border wall on June 30, 2021 in Pharr, Texas. Gov. Abbott has pledged to build a state-funded border wall between Texas and Mexico as a surge of mostly Central American immigrants crossing into the United States has challenged U.S. immigration agencies. So far in 2021, U.S. Border Patrol agents have apprehended more than 900,000 immigrants crossing into the United States on the southern border.

Both Prince and the Trump administration have denied accusations that the private security mogul was actually working for the White House. In January 2020, Bloomberg reported Prince's "scouting effort for gold investments" as he reportedly paid a secret visit to the Venezuelan vice president — potentially violating US laws by meeting with a sanctioned official.

In February this year, The New York Times reported, citing a confidential UN report, that Prince violated the UN arms embargo on Libya in 2019 by delivering weapons to Libyan National Army's Field Marshal Khalifa Haftar when he attempted to overthrow the UN-backed Government of National Accord headed by Fayez al-Sarraj. Prince's spokesman told The NYT in March that the contractor had "nothing whatsoever to do with any alleged private military operation in Libya."

The actions of Prince's Blackwater mercenaries in Iraq have sparked an international debate about the role of private security companies hired by the US government to work in war zones. On September 16, 2007, Blackwater guards opened fire against unarmed locals while escorting US diplomats, claiming that the convoy was targeted by a car bomb. No explosives were found in the vehicle. Afterward, Blackwater was temporarily banned from Iraq. The Iraqi Interior Ministry said that year, citing the results of an initial investigation, that the mercenaries were fully responsible for killing the civilians.

In December, just less than a month before Biden was inaugurated, Trump granted full pardons to four former Blackwater contractors convicted in connection with the death of 14 unarmed Iraqi civilians, including two children, in Baghdad in 2007.