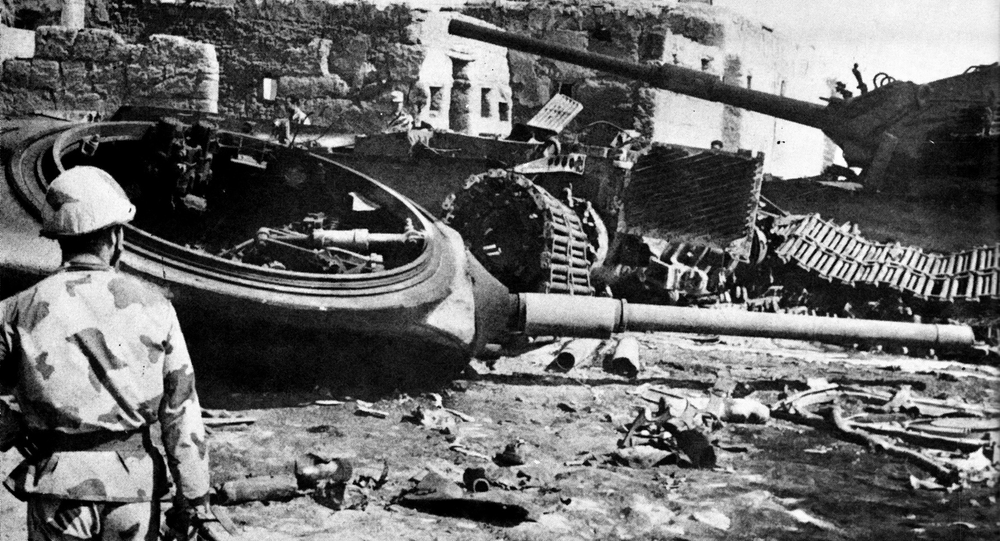 On 6 October 1973, Egypt and Syria mounted a surprise invasion of Israel during the Yom Kippur religious holiday. The three-week war that followed ended in an Israeli military victory, but the first week of hostilities saw a series of victories for the Arabs which forced an emergency intervention by the US to prevent Tel Aviv’s defeat.

Newly published archival documents show that Israel's top brass was desperate to show to its enemies and the world during the first tense week of the Yom Kippur War that it was still capable of successful offensive operations, with one plan reportedly including a mass bombing campaign of Syrian cities.

“I have been living – since the beginning of the campaign – with the feeling that we cannot leave [the war] in a situation that the world says: That’s it. What we thought about Israel and the [Israel Defence Forces]: That’s it,” Prime Minister Golda Meir said during a meeting on 10 October, her remarks outlined by the Defence Ministry and quoted by the Times of Israel.

“We are ready to go back but the Egyptians aren’t totally ready to go back, but they’d be ready for a ceasefire for the following reason: That tomorrow we are bombing all of Syria, including the cities, and that we are advancing into Syria, and the world will believe that we are strong,” IDF Chief of Staff David Elazar said during the same meeting.

“No one in the world recognises our weakness, not in Israel, not in America, not the Arabs and not the Russians. Tomorrow they’ll believe it more, that we are preparing for this, that we are going to Damascus,” Elazar added, referring to the superpower rivalry at the time, in which the Soviets supported the Arabs while Washington backed Tel Aviv.

In the first week of the war, Egyptian and Syrian troops achieved a number of stunning victories against Israeli forces, with the former successfully crossing the Suez Canal, destroying the defences of the so-called Bar Lev Line and advancing some 20 km into the Sinai, which Israel had occupied during the Six-Day War of June 1967. Syrian forces, meanwhile, entered the occupied Golan and advanced toward the Sea of Galilee.

Israeli air superiority, assured at the start of the 1967 war by its surprise bombings of Syrian and Egyptian airfields, proved less effective in 1973, with the Arab armies equipped with the latest Soviet air defence systems and fighter jets, including the SA-6 Gainful surface-to-air missile, which took out dozens of enemy aircraft.

The unexpected routing of Israeli forces prompted Tel Aviv’s US ally to launch an emergency strategic airlift operation known as Operation Nickel Grass, which helped Israel survive the initial blows and eventually start to beat back the Arabs. US support included parking up an aircraft carrier strike group in the Mediterranean to assist in the supply operation. That mission led to an increased risk of World War III as the Soviet Mediterranean task force faced off against its US counterparts and engaged in a resupply mission of its own.

‘They Broke Through Our Lines in One Shot’

“We had a night that was not good. Compared to yesterday, on the canal, it was a bit better. We succeeded in blocking them. But on the other hand, on the Golan, they broke through our lines in one shot with large quantities of tanks,” Elazar was quoted as saying on 7 October, adding that Israel’s Golan outpost had been totally overrun.

During that meeting, Deputy Prime Minister Yigal Allon proposed bombing Damascus in response, with the idea shot down by Elazar amid fear of Syrian retaliation in kind. “Technically there’s no difficulty for us to bomb [Damascus]. But practically they aren’t attacking cities, and I don’t’ want to start that,” he said.

Despite the IDF chief of staff’s objections, the Israeli air force did go on to launch several air raids over the Syrian capital, eventually also targeting it with artillery.

In one meeting, IDF Deputy Chief of Staff Israel Tal warned that if Israel did not achieve a decisive victory soon, its enemies would consider it “weak” and seek to pursue the war to the end.

“I agree with the chief of staff that our credibility is going to run out. If there’s not a turning point, then our friends and enemies will reach the conclusion that the State of Israel is weak. Once there is that conclusion, there’s no doubt that the Arabs will want it all and won’t settle for a small amount,” Tal said.

The official called for the urgent redeployment of forces from the Syrian front to the Sinai, where the Egyptian advance was causing mounting losses and threatened Israel’s soft underbelly.

Defence Minister Moshe Dayan disagreed, saying that “smashing” the Syrians was the first priority, and suggesting that “we need them to shout that we’re approaching Damascus,” with such an advance deemed “essential for breaking” the Arab Republic and “bargaining” them into a ceasefire. Meir agreed with Dayan’s calculations.

A transcript from 10 October also showed a dilemma for the Israelis amid a possible intervention by the United Nations, with the cabinet reportedly approving the idea of an immediate ceasefire on the Syrian front, where the IDF had made gains, but opposing it on the Egyptian front, where its forces had been pushed back. PM Meir said in the meeting that Israel’s US allies would veto a Security Council call for a withdrawal to the 1967 borders.

Along with the documents, the IDF released previously unpublicised photos of Meir’s meetings with Israeli high command in the field.

Although Israel gradually reversed its fortunes, coming within several kilometres of Damascus in the north and surrounding large Egyptian tank formations in the Sinai in the war’s final weeks, the Yom Kippur War is nevertheless widely regarded as the first major military failure for the IDF, with Israeli forces losing up to 8,800 troops, over a thousand tanks, 400 armoured vehicles and 350+ aircraft. On the Arab side, Egyptian and Syrian forces suffered roughly 9,000 dead, and 1,775 tanks and 450 jets and helicopters lost.

The Yom Kippur War eventually led to the signing of a US-brokered Egypt-Israel peace treaty in 1979, and included an end to the Israeli occupation of the Sinai. The Syrian side has yet to sign a similar treaty, and Israel continues to occupy large swathes of Syrian territory in the Golan.

© AP Photo / BOB DAUGHERTY
In this file photo taken March 26, 1979, Egyptian President Anwar Sadat,left, U.S. President Jimmy Carter, center, and Israeli Prime Minister Menachem Begin clasp hands on the north lawn of the White House as they completed signing of the peace treaty between Egypt and Israel. When Israeli Prime Minister Menachem Begin shook hands with Egyptian President Anwar Sadat on the White House lawn on March 26, 1979, ordinary Israelis saw not only an end to war with their largest neighbor but also the hope of warm relations with the people next door
...
Reddit
Google+
Blogger
Pinterest
StumbleUpon
Telegram
WhatsApp
30