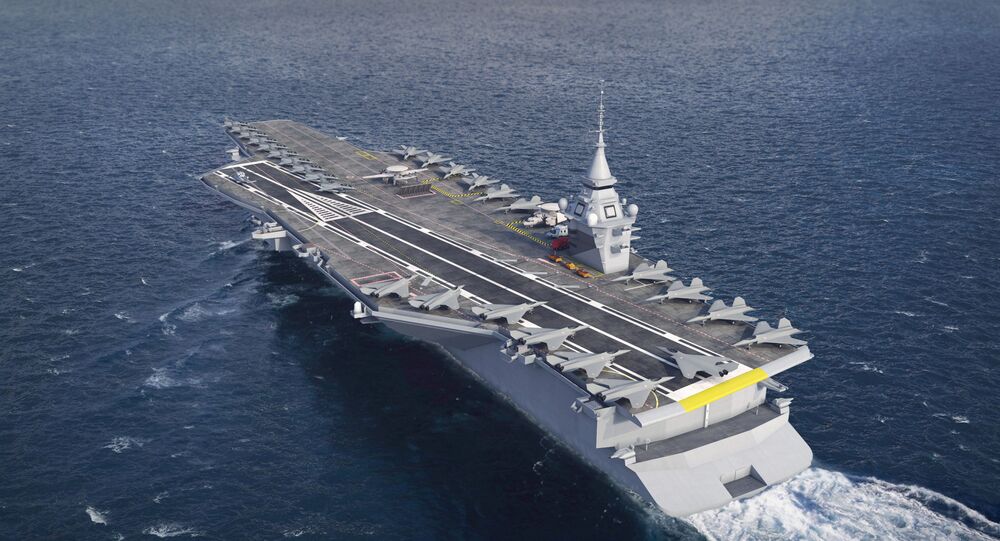 The new warship will be the largest France has ever built, just as the UK Royal Navy’s new aircraft carrier, the HMS Queen Elizabeth, is its largest ever. However, Paris’ newly announced carrier isn’t expected to enter service for nearly 20 years.

The design for France’s next aircraft carrier has been unveiled. The New Generation Aircraft Carrier (Porte Avion Nouvelle Génération, or PANG) was announced on Tuesday by French President Emmanuel Macron during a visit to nuclear reactor manufacturer Framatome.

French shipbuilder Naval Group also released concept art of the carrier, showing it to be similar in layout to the Charles de Gaulle, France’s current and only aircraft carrier.

"Charles de Gaulle, as you know, will come to the end of its life in 2038. This is why I have decided that the future aircraft carrier that will equip our country and our navy will be nuclear-powered like the Charles de Gaulle," Macron said. Framatome helped build the nuclear reactors that power the de Gaulle, which was built starting in 1987 and commissioned in 2000.

“Your plant in Le Creusot, which has been producing parts essential to our navy for a long time, will produce, among others, several major parts of the nuclear boiler [reactor] of the future aircraft carrier by forging and machining them right here,” he added. “By these choices, we confirm France’s desire to preserve its strategic autonomy."

Sporting a hard hat and mask, Macron was shown a model of the new carrier at the Framatome facility in Courbevoie, just outside Paris proper.

While Macron’s announcement was short on details, France Defense Ministry Florence Parly gave some of the ship’s stats in a Twitter thread later on Tuesday. She said the warship will have a displacement of roughly 75,000 tons - almost twice the size of the de Gaulle - a speed of roughly 27 knots, two K22 reactors and a complement of 2,000 sailors and 30 Future Combat Air System (Système de combat aérien du futur, or SCAF) sixth generation fighter aircraft. She gave no information about the likely assignment of unmanned aerial vehicles to the carrier.

​Parly said the choice of nuclear power, the only aircraft carriers that make use of which are American and French, was in part to “maintain the unique skills” of France’s nuclear industry.

“From a ‘practical’ point of view, nuclear power has two major advantages: it allows autonomy to be gained, since it does not require a supply of fuel, except for its aircraft. And it allows excellent building availability,” Parly wrote. “We are acting in the long term: over the next few years we will build the nuclear propulsion systems for our” ballistic missile submarines and attack submarines. “If our engineers did not design on-board nuclear boilers for decades, we would weaken this know-how and our sovereignty.”

In June, a report by French Senators Olivier Cigolotti and Gilbert Roger that was viewed by Naval News noted some additional technical details, including that the PANG will receive two electromagnetic aircraft catapults from General Atomics, which is building the EMALS systems for the US Navy’s Ford-class carriers.

At present, only US and French carriers launch aircraft using catapults, but China’s new Type 002 aircraft carrier, presently under construction in Shanghai, will also have EMALS catapults. The rest of the world’s carriers use a bow ramp to lift planes into the sky, which is safer but reduces the maximum fuel and weapons capacities on aircraft.

Naval News also reported PANG is likely to sport the French Navy’s new Sea Fire multifunction 3D radar that will first be mounted on the futuristic new Intervention and Defense Frigate (Frégate de Defense et d’Intervention, or FDI) presently under construction at Naval Group’s Lorient shipyard. The PANG will be built nearby, in Saint-Nazaire, Parly said.

She added that maturation of the ship’s technologies will take many years, and the Ministry of Armed Forces said the French state will be investing €1 billion in the program by 2025, although it could cost some €5 billion overall.