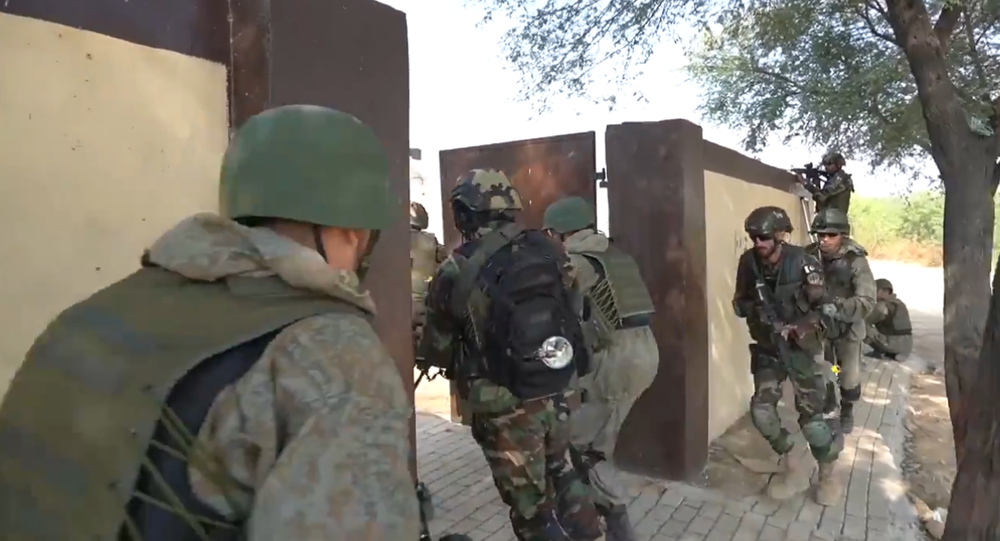 Over 70 Russian special forces troops were sent to the South Asian nation on November 5 to take part in the Friendship 2020 drills. The two countries have held the exercises since 2016, and signed a formal security training agreement in 2018.

The Russian Defence Ministry has released dramatic training footage of the finale of the Friendship 2020 joint counterterrorism exercises in Pabbi, northern Pakistan.

The footage shows Pakistani Cobra helicopters firing machineguns and rockets at a simulated ‘terrorist base’, with special ops troops then seen fast-rope repelling from Mi-8 transport helicopters and proceeding to surround the facility.

Troops from both countries then blast through the base’s gates, clearing rooms, deploying flashbangs and firing live rounds at simulated targets. Footage also shows a trooper carrying an ‘injured’ comrade to safety.

The troops proceed to fire on enemy forces outside the facility using both assault rifles and sidearms, and blowing up hard points with grenades.

Russian and Pakistani troops spent nearly two weeks training as part of the Friendship 2020 drills, which took place at the Pakistani Army’s Tarbela Special Operations Training Ground and the National Counterterrorism Center in Pabbi. This year’s drills were the fifth consecutive year that the two countries’ forces have conducted the Friendship-series counter-terrorism training, and the third time that the exercises have been held in Pakistan, with previous installments also held in Russia.

Russian forces were represented by over 70 troops from the Southern Military District’s 49th combined arms army, ordinarily based in Stavropol, southern Russia.