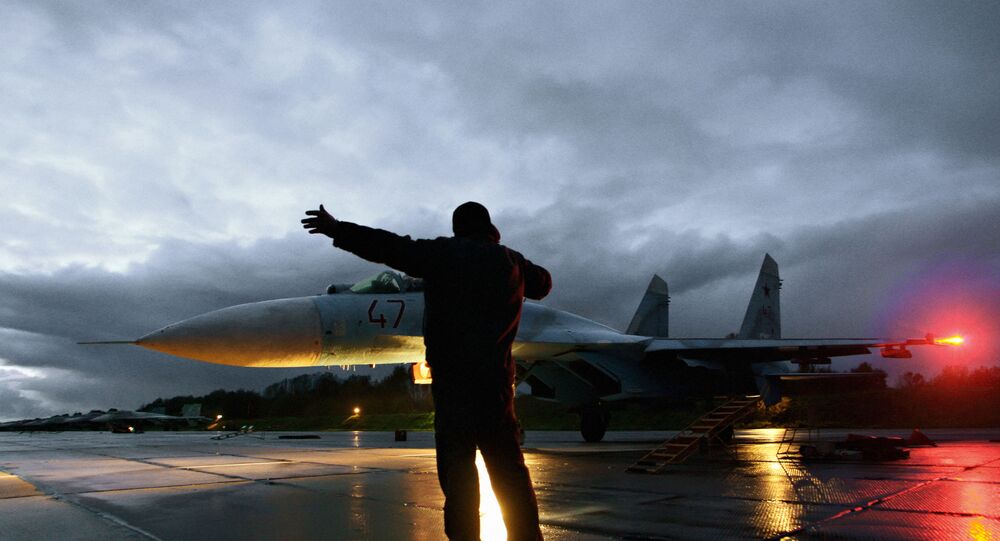 The latest incident comes less than a day after Russian warplanes intercepted NATO spy planes flying near Russia's borders in the Black and Baltic Seas.

"The crew of the Russian fighter jet approached to within a safe distance of the aerial object, identified as an American P-8A Poseidon reconnaissance aircraft," the Center said in a statement.

The Su-27 was said to have returned to its airfield after the US plane turned away from Russia's maritime border. "The violation of the state border of the Russian Federation was prevented," the military command center indicated.

Earlier Thursday, media reported that a Royal Air Force RC-135W had carried out a reconnaissance flight about 40-60 km off the Russian exclave of Kaliningrad. In a separate incident, the fifth of its kind over the past 24 hours, a US Navy P-8A Poseidon reportedly approached the Russian naval base in the Syrian port of Tartus.

The steady stream of flights and interceptions this week are just the latest among thousands of similar patrols taking place along Russia's borders in recent years, with NATO spy planes, reconnaissance drones, bombers and fighters approaching Russia in the Barents, Baltic, Black and Mediterranean Seas, as well as the Seas of Japan and Okhotsk to carry out surveillance or simulate attack runs.

Russia has repeatedly warned that such patrols carry with them the risk of escalating tensions. The Pentagon has dismissed Moscow's concerns, but has also occasionally complained about Russian military pilots' "unsafe" and "irresponsible" maneuvers during interceptions, either via the buzzing of US planes or approaching to within a few meters of their aircraft. The Russian Ministry of Defence maintains that all Russian flights are carried out in accordance with international rules on the use of neutral airspace.

In a related development, the US and several NATO partners plus Ukraine and Georgia kicked off major drills in the western Black Sea this week, with Russia staging its own exercises off Crimea.