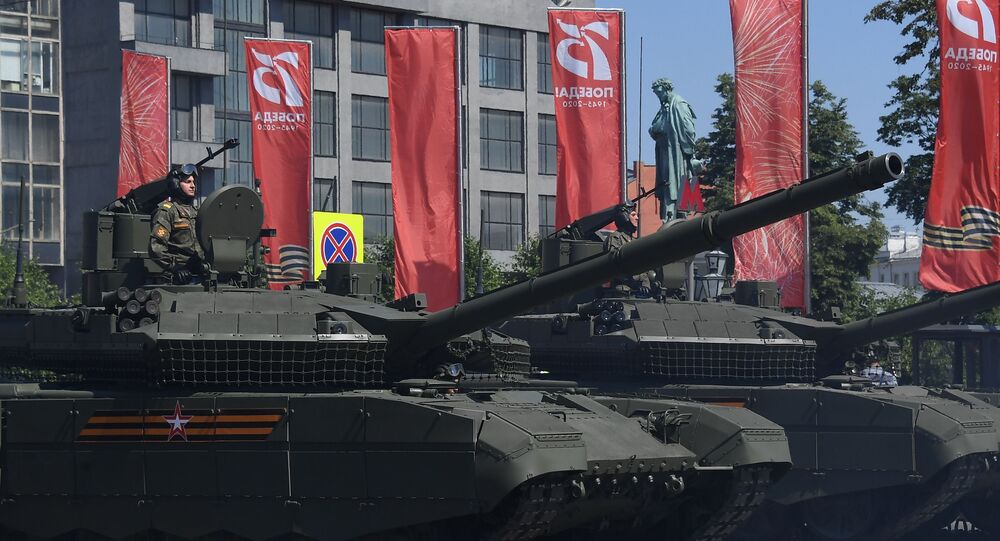 This year, instead of the traditional May 9 Victory Day parade, Russia marked the anniversary of the triumph over Nazi Germany on June 24, on the 75th anniversary of the first parade dedicated to the occasion in 1945. For the event, nearly 14,000 troops and 225 pieces of military equipment were assembled, including some systems never seen before.

The June 24 Victory Parade showed off some of the new and upgraded weapons systems in Russia’s arsenal, including T-90M tanks, TOS-2 multiple launch rocket systems and modernized T80-BVM tanks, and the Chinese-language edition of the Global Times newspaper has taken note.

“The [T-90M] main battle tank, which is called the ‘king of land warfare’, has been the main protagonist of Victory Parades in recent years,” the newspaper noted, pointing to the tank’s “significantly improved combat effectiveness,” and ability to meet the operational requirements of the Russian Army with its 1130 horsepower diesel engine, next-gen reactive armour, new electronics and the tried and tested Shtora active defense system.

Along with the T-90M, the modernized T-80BVM similarly captured the attention of observers, according to Global Times, owing to its unique gas turbine engine, suitable for Arctic deployments thanks to its ability to start up in temperatures as low as -50 degrees Celsius. “The tank is also equipped with a new gunner sight, new gun control system, and an improved in-vehicle radio system,” the author explained.

© Sputnik / Фотохост-агентство
T-80BVM tanks on the march on Red Square during the parade dedicated to the 75th anniversary of victory in the Great Patriotic War.

A system which made its debut at this year’s parade was the TOS-2, a new MLRS based on the TOS-1, but using an Ural 6x6 truck chassis instead that of a T-72 tank. “At the moment, public information about this new weapon is very limited, but there are reports that it has significantly improved  in terms of automation, range and strike accuracy,” the paper suggested.

Global Times was also impressed by rare World War II vehicles featured at the parade, including legendary T-34 tanks and SU-100 tank destroyers. “The demonstration of such a large inventory of rare equipment from the Second World War in recent years is a rarity and suggests that Russia deeply respects its ‘iron heroes’ of the Great Patriotic War,” the newspaper concluded.

A contingent of Chinese People’s Liberation Army troops marched alongside Russian soldiers at last week’s parade. While it was not a participant in the European theatre of World War II, China took the brunt of Japanese militarist aggression in the Asian theatre, suffering roughly 20 million casualties, including up to 3.75 million military casualties, during the war, which began with the 1937 Japanese invasion. Thanks to dogged resistance by both Communist and Nationalist Chinese forces, the Imperial Japanese Army was forced to deploy as much as 80 percent of its troops on the Chinese mainland, with Tokyo proving unable to secure its hoped for speedy victory before Pearl Harbor and the invasions of the Philippines, Indonesia, and other Asian and Pacific territories.

Facebook to Put Labels on Russian, Chinese ‘State-Controlled’ Media but Will Omit US Outlets