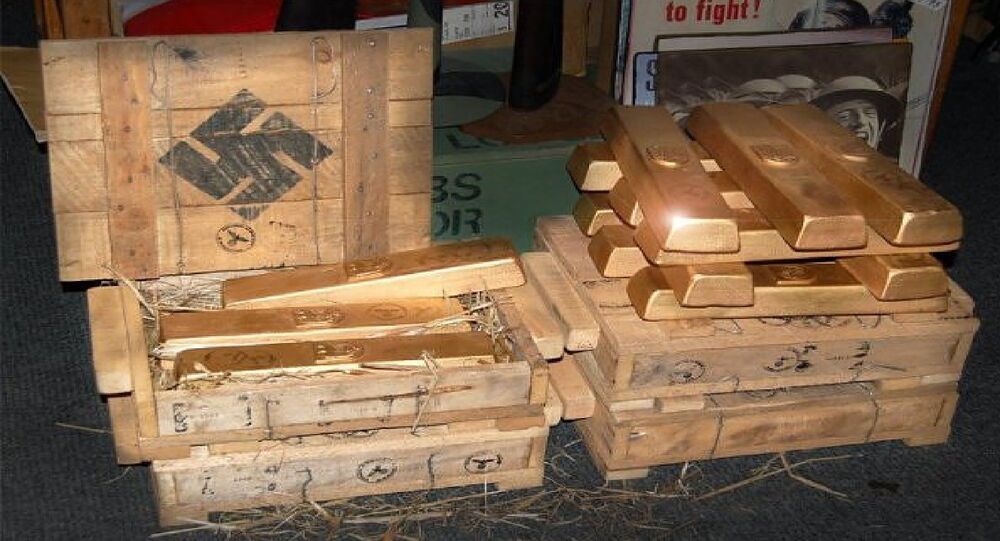 Researchers searching for the treasure are convinced they’ve found the right place, with the castle’s owners already installing a perimeter fence and CCTV cameras in the place the bullion is believed to be hidden to stop a wave of treasure hunters expected to flock to the area.

Researchers looking for billions of dollars-worth of Nazi treasures stolen from across occupied Europe during World War II believe they’ve honed in on one of the hiding places –a 16th century German castle situated in modern-day Poland were as much as 28 tonnes of gold and other treasures may be hidden.

The Hochberg Palace, situated in the village of Roztoka, Lower Silesia, about 40 km north of the Czech border, is one of 11 locations described in the diary of SS Standartenfuhrer Egon Ollenhauer. The diary was kept in a German Freemason lodge in Saxony-Anhalt for many decades, its existence revealed last year, after the last of the former Nazi officers connected with it had passed away.

Roman Furmaniak, head of the Silesian Bridge foundation, which took possession of the diary a decade ago, says the document clearly points to Hochberg Palace as the location of one of the treasure hiding spots. According to the diary, underneath the palace, in a room at the bottom of a blasted well shaft, Reichsbank gold bars and other treasures from Breslau (the former German city transferred to Poland after WWII) worth as much as $1.54 billion in today’s dollars may be buried.

“Based on instructions I received from the Quedlinburgers [Freemasons], I believe I have located the well in the grounds of the palace,” Furmaniak said, speaking to The First News.

The loot, said to have been deposited with the Waffen SS by wealthy local residents in a bid to hide treasures amid a string of catastrophic Wehrmacht defeats on the Eastern Front, is believed to be buried under the castle, along with the corpses of several eyewitnesses who heard or observed the operation to destroy the well shaft.

One of the diary pages from early 1945 specifically mentions the palace and Dr. Gunther Grundmann, a German conservator tasked with cataloguing and hiding Nazi treasures amid the Third Reich’s  imminent collapse:

“Dr. Grundmann and his people had already prepared in the grounds of the palace a deep well. The Following was placed at the bottom in crates: jewelry, coins and ingots, many of them were damaged, they had traces of gunfire. After we finished everything, the well was blown up, filled in and covered. Grundmann is a very good organizer. After the delivery of these 28 tonnes, the field gendarmes were sent away, their whereabouts…unknown. Sealing, covering and securing the site was achieved by an explosion, which was planned in the park according to Dr. Grundmann’s plan and sketch.”

The Hochberg Palace in Roztoka, one of many estates once owned by the wealthy aristocratic family, was purchased in 2017 by a Polish family seeking to fix up the castle and turn it into a tourist attraction. Local heritage authorities have given the green light to a search for the exploded well, and the owners have set up fencing and round-the-clock surveillance to prevent treasure hunters from gaining access to the property.

Furmaniak handed the SS officer’s diary to Poland’s ministry of culture in 2019. Before that, several German institutions, including the Department of Art History at the University of Gottingen, verified that the diary and its pencil script date back to WWII. Polish authorities have yet to follow suit.

According to Furmaniak, the lodge would like for any of the possessions found as a result of the search to be “reunited with their heirs if this is possible.” Among the 11 locations mentioned in the diary are vast treasures, religious artifacts and artwork from Poland, the Soviet Union, France, Belgium and other areas once occupied by the Nazis.