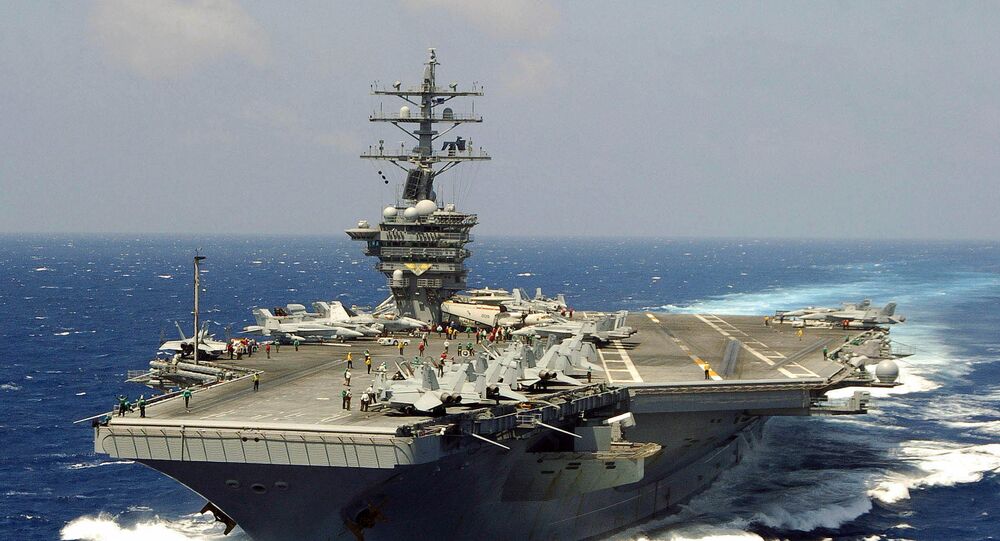 The Mediterranean Sea area is home to two major conflicts – a full-blown civil war in Libya (which turned into a failed state in 2011 following NATO airstrikes) and tensions in Syria between Damascus and Washington’s Turkish allies.

The USS Dwight D. Eisenhower crossed through the Strait of Gibraltar and entered the Mediterranean Sea on Saturday night, the Marine Traffic maritime information portal has reported.

According to the resource, the aircraft carrier, going by the call sign NIKE, is currently sailing east of Gibraltar as of Sunday afternoon.

The ship reportedly has an escort of several other US Navy warships, including the USS San Jacinto and USS Vella Gulf Tomahawk-armed guided-missile cruisers, as well as a destroyer squadron consisting of the USS Stout, USS James E. Williams and USS Truxton destroyers.

The US Navy issued a press statement about the Eisenhower’s operations last week, saying that the strike group was “conducting operations in the US 6th Fleet to support maritime security operations in international waters, alongside our allies and partners.”

The Sixth Fleet is headquartered in Naples, Italy, and operates in the European and North African theatres, including the Mediterranean Sea.

The strike group is thought to include eight squadrons of F/A-18E fighter jets as well as maritime attack choppers, and to be manned by some 6,000 sailors.

“Ike offers tremendous capability to the region,” Vice Admiral Lisa Franchetti, commander of the Sixth Fleet, said in a statement to the Navy. “During her operations in the Atlantic, Ike strike group will exercise the fundamental warfare practice of ensuring the security of vital sea lanes of communication. The deployment will also serve to demonstrate commitment to our allies and partners in Europe and Africa,” she added.

The Eisenhower began its deployment on February 20, immediately after completing its month-long certification exercises, and without returning to the carrier’s home port in Norfolk, Virginia. The Navy did not offer an official explanation as to why the carrier deployed without the stopover.

Prior to deployment, the 40-year-old carrier spent 18 months undergoing repairs. The warship is known to have participated in the Gulf War in 1990-1991, and in support of US operations in Iraq and Afghanistan in the 2000s.

It’s not immediately clear where exactly the Eisenhower is headed. However, the Mediterranean Sea is known to be home to two major hotspots – Libya and Syria.

Late last month, Eisenhower strike group commander Rear Adm. Paul Schlise boasted that the sailors of his ships were “trained and ready to execute the full spectrum of maritime operations in any theatre. Carrier strike groups are visible and powerful symbols of US commitment and resolve to our allies and partners, and possess the flexibility and sustainability to fight major wars and ensure freedom of the seas.”