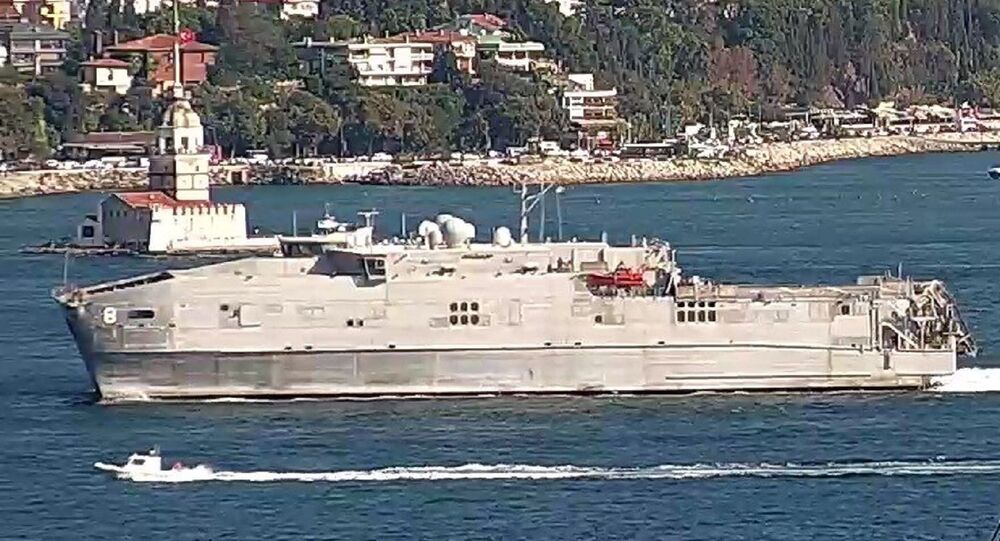 Earlier, the Bosphorus Observer, which tracks ships passing through the strait between Europe and Asia, reported that the US naval ship USNS Yuma had entered the Black Sea.

The Russian Black Sea Fleet is following the moves of the USNS Yuma which entered the Black Sea on September 14, the Russian National Defence Management Centre said. The Centre added that the fleet is constantly monitoring the US vessel.

The ship sailed into the Black Sea on Sunday morning, its third such move in 2019.

USNS Yuma belongs to the Spearhead class of high-speed transport vessels. Ships of this type are multi-purpose non-combat vessels designed for the rapid transfer of troops, cargo and military equipment as well as for humanitarian relief operations. The flight deck of the ship allows the operation of the CH-53E Super Stallion helicopter. The ship is armed with four heavy M2 machine guns.

These ships are auxiliary vessels owned by the US Navy and operated by the Shipping Command, which is responsible for organising shipping operations for all types of US forces. The crew of such vessels usually consists of civil servants of the US Navy.

Russia has repeatedly accused the US-led bloc of illegally expanding eastward in Europe in violation of its promises. NATO has been building up its military on Russia’s eastern flank, stationing troops in Estonia, Latvia, Lithuania, and Poland in 2017, while US warships have been routinely calling at Black Sea ports.