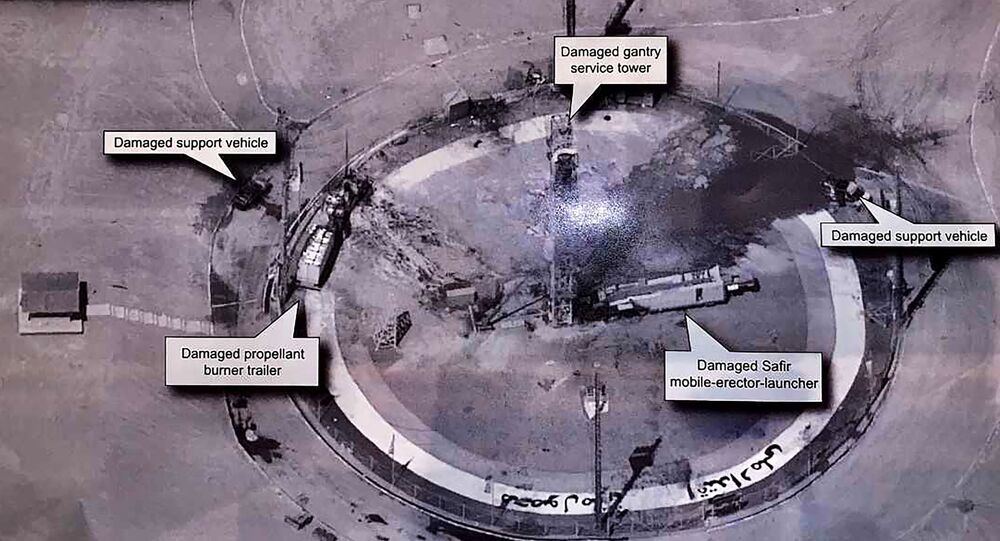 On Monday, Iranian authorities, for the first time, confirmed that a rocket had exploded at the country's Imam Khomeini Space Centre on Thursday due to a malfunction at a test site. The statement was made a few days after US President Donald Trump taunted Tehran on Twitter by sharing a photo of the apparent explosion at the site.

President Donald Trump tweeted out a now-viral image from what appeared to be a highly-classified intelligence briefing to deny US involvement in a "catastrophic accident" that resulted in a rocket explosion at Iran's space centre.

Trump defended his decision to release the photo, saying "I have the absolute right to do" so after it raised concerns that the president could have revealed sensitive military information, with experts now alleging that the image could have come from a US KH-11 spy satellite called USA-224.

Astronomer at the Netherlands Institute of Radio Astronomy (ASTRON) Cees Bassa was among the first to assume that the image was likely taken by the USA-224, judging by the features of the launchpad and the positioning of the camera.

The image shows the aftermath of an accident with an Iranian Safir rocket at the El Khomeini Spaceport. From the features of the launch pad, I find that the viewing directions of the camera match that of USA 224, a classified spy satellite.

​Marco Langbroek, a Dutch expert who tracks satellites, has as well suggested that the highly secretive satllite was over the the Iranian test site around the time the accident occurred.

In his analysis, Langbroek wrote that he was able to simulate the view from the USA-224 and it looked similar to the image tweeted by Trump.

"Ignoring the shadow directions, the simulated view is very similar to the actual image, pointing out that indeed the image very likely was taken by the USA 224 satellite", he added.

Another satellite imagery expert, Melissa Hanham, told NPR that at first she was sceptical that such a high-quality photo could have been taken by a satellite, but admitted that the analysis by her colleagues looked quite convincing.

As speculation mounted about the rocket's explosion at the Imam Khomeini Space Centre, Iranian Government spokesperson Ali Rabiei acknowledged, for the first time, that the accident had indeed occurred.

Speaking to local media, Rabiei clarified that a technical failure caused the explosion at a test site, not at the launch site, as was reported.

He has likewise dismissed the claims that the rocket exploded due to "manipulations" from outside, while expressing bewilderment at Trump tweeting out satellite pictures "with excitement".