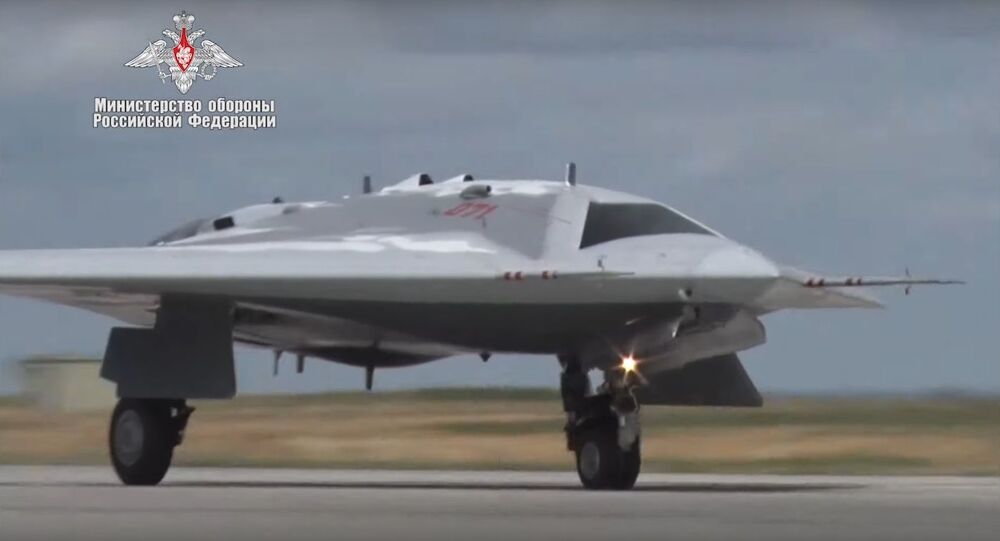 Testing started earlier this year, the 20+ tonne flying wing design, thought to be capable of carrying up to 2.8 tonnes of precision armament, has been dubbed the Hunter (‘Okhotnik’).

The Russian Ministry of Defence has released footage of the first flight of the Sukhoi S-70 Okhotnik drone, showing the unmanned aerial vehicle taking off from a test airfield and conducting a 20 minute flight at altitudes of up to 600 meters before touching back down.

Testing of the UAV first began at the Novosibirsk Aviation Plant earlier this year.

Created by engineers from the Sukhoi Design Bureau, makers of the Russia’s Su-57 fifth generation fighter, the Okhotnik is said to be made of advanced composite materials and coatings which ‘make it practically invisible to radar’, and is fitted with equipment for optoelectronic, radio-based and other types of reconnaissance. According to Rossiyskaya Gazeta, the drone may also be equipped for strike missions, and is designed to be paired with the Su-57 for joint missions.

The Okhotnik has a 19 meter wingspan, making it larger than some fighters, and is rumoured to use the AL-31 series engine found aboard Su-27 fighters. Presented at a Russian military expo in June, the drone is said to have a flight range of up to 3,500 km, and the ability to fly up to 920 km per hour at up to 10,500 meters.

The Okhotnik is Russia’s first heavy drone design, with work on the project beginning in 2012.