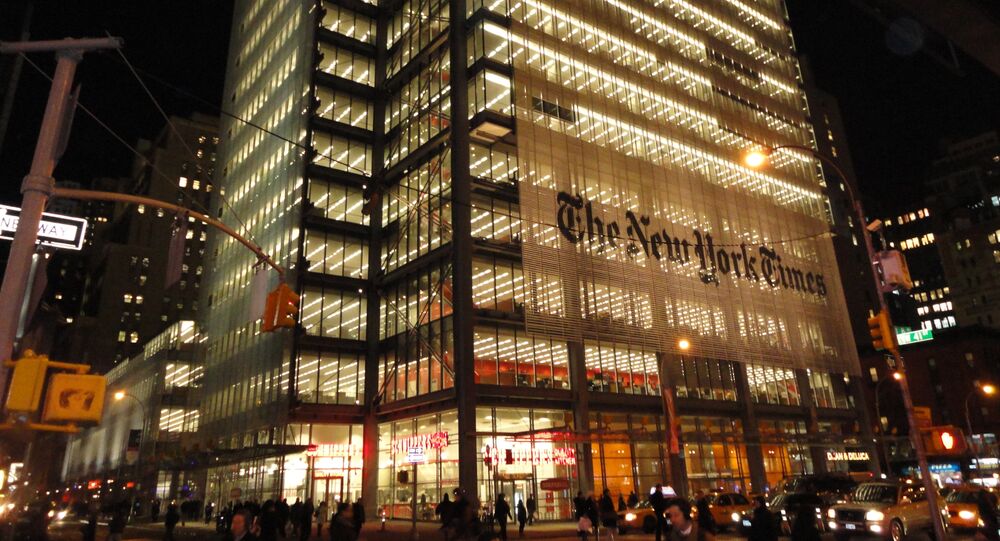 On 15th June, the New York Times reported that Washington was “stepping up digital incursions into Russia’s electric power grid in a warning to President Vladimir Putin”. The article enraged President Donald Trump, who took to Twitter to attack the outlet, calling the “not true” story “a virtual act of treason by a once great paper”.

“Anything goes with our corrupt news media today. They will do, or say, whatever it takes, with not even the slightest thought of consequence! These are true cowards and without doubt, THE ENEMY OF THE PEOPLE!” he fulminated.

In response, the paper’s public relations account said accusing the press of treason was “dangerous”, and claimed its reporters had “described the article to the government before publication”.

As Grayzone Project has noted, this comment seems to quite troublingly suggest the story “had been cleared with the US government before being printed” - seeking clarification on what whoever wrote the tweet really meant, I reached out the Times for comment.

Danielle Rhoades Ha, the outlet’s vice president of communications at the paper, responded by saying the article’s author "ran the details of a story by the FBI for comment before publishing the story to ensure fairness and accuracy."

“This shows the kind of unprecedented hatred I have been putting up with for years with this Crooked newspaper. Is what they have done legal?” the President raged.

The story which drew the President’s ire - and "spread this blatant falsehood" - was published by the Washington Examiner 20th June. In it, the outlet revealed Times reporter Michael Schmidt sent an email in March 2017 to FBI Assistant Director for Public Affairs Michael Kortan, stating his co-workers had stumbled onto tantalising information about Jared Kushner, President Trump's son-in-law and top adviser - Kortan forwarded the email to FBI special agent Peter Strzok, head of the bureau's Russia investigation the very next day.

"Three of my colleagues [have been] told Jared Kushner is among the individuals the FBI is scrutinizing for their meetings with Russians. My colleagues were told Ambassador Kislyak, after meeting Kushner and General Flynn in early December at Trump Tower, set up a meeting with Kushner and a Russian banker. Kushner ultimately met with the Russian banker. The banker worked for Alpha Bank,” Schmidt wrote.

While the article was indeed corrected to "remove the characterization the New York Times reporter ‘fed information’ to the FBI", the piece retains some extremely eyebrow-raising content, for it notes an April 10th 2017 internal bureau email seems to indicate the Bureau has been provided a preview of an impending Times article.

"The editing is nearing completion and we have one last shot to hear what the end result is. Do you have time later today or tomorrow that is convenient for a listening session? Likely by phone in Mike’s office," a redacted FBI operative informs a number of fellow staff, including Strzok and former FBI lawyer Lisa Page.

That missing very much seems to indicate the Times does vet its stories with officials, and affords them pre-publication input on content, which is somewhat contrary to Ha’s suggestion its reporters merely run the details of stories by agencies or individuals named in a story.

Still, that such a relationship exists between Washington power structures and ‘The Gray Lady’ is hardly news - even if it’s never admitted in mainstream discourse.

© Sputnik / Denis Voroshilov
New York Times Accidentally Unravels UK Government's Official Skripal Narrative
Perhaps the best source of information on this toxic subterfuge is James Risen, a veteran Times reporter now writing for The Intercept - in a lengthy article published 2018, he documented how the paper’s editors had been "quite willing to cooperate with the government" for the duration of his employment there. This "informal arrangement" was beneficial for both sides, as in turn the organ was a recipient of leaks of juicy information from insiders, among other privileges - what the Times reported, and how, was moreover considered immensely important by officialdom, and influenced their own decision-making.

"The smartest officials realized leaks to the press often helped them, bringing fresh eyes to stale internal debates. And the fact the press was there, waiting for leaks, lent some discipline to the system. A top CIA official once told me his rule of thumb for whether a covert operation should be approved was, ‘How will this look on the front page of the New York Times?’. If it would look bad, don’t do it. Of course, his rule of thumb was often ignored,” Risen wrote.

This arrangement also extended to the paper electively suppressing "sensitive national security stories" at the behest of Washington - a culture of willing censorship Risen "usually went along with", at least at first. For instance, about a year prior to 9/11, he learned the CIA sent case officers to Afghanistan to meet with Ahmed Shah Massoud, leader of the rebel Northern Alliance, to convince Massoud to help the Americans go after Osama bin Laden, at that time living in Afghanistan under Taliban protection.

"When I called the CIA for comment, then-CIA Director George Tenet called me back personally to ask me not to run the story. He told me the disclosure would threaten the safety of the CIA officers in Afghanistan. I agreed," Risen explained.

​He would finally write the story after 9/11, but wondered whether it’d been a mistake to withhold the story - independent investigations of 9/11 concluded the CIA’s effort to target bin Laden before the attacks had been half-hearted, and if he’d reported the story before that fateful day, "the CIA would have been angry, but it might have led to a public debate about whether the US was doing enough to capture or kill” the al Qaeda leader, which in turn “might have forced the CIA to take the effort to get bin Laden more seriously.".

"My experience with that story and subsequent ones made me much less willing to go along with later government requests to hold or kill stories…that ultimately set me on a collision course with the editors at the New York Times," he continues.

Moreover, after the 9/11 attacks the Bush administration began asking the press to kill stories with such frequency Risen became convinced the administration "was invoking national security to quash stories that were merely politically embarrassing" - and in the lead-up to the Iraq War he would often "clash" with his superiors over the paper’s coverage of the Bush administration’s claims about pre-war intelligence on Iraq.

"My stories raising questions about the intelligence, particularly the administration’s claims of a link between Iraq and Al Qaeda, were being cut, buried, or held out of the paper altogether…Then-Executive Editor Howell Raines was believed by many at the paper to prefer stories that supported the case for war," Risen despaired.