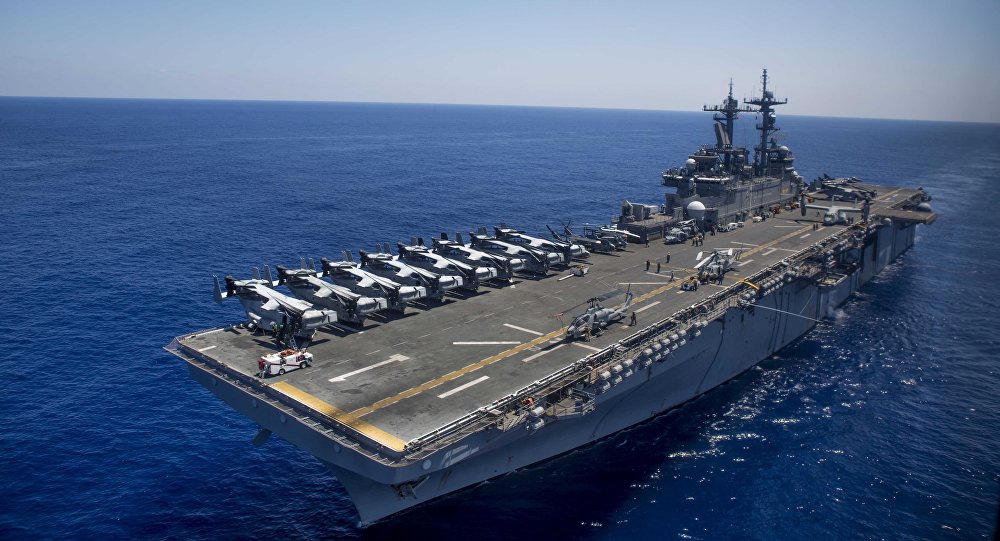 American defense contractor Raytheon was recently granted a four-year, $234.6 million contract from the US Navy in exchange for a low-rate initial production of 23 Joint Precision Approach and Landing Systems (JPALS) for the service’s nuclear-powered aircraft carriers and amphibious assault ships.

The landing system, which originated in 1996 and was later developed in a partnership between Raytheon and the US Navy that began in 2008, is described by the contractor as a “GPS-based precision landing system that guides aircraft onto carriers and amphibious assault ships in all weather and surface conditions up to the rough waters of Sea State 5.” Sea State 5 indicates rough waters with waves that reach heights between eight and 13 feet.

It further explains that the landing system “uses an encrypted, jam-proof data link to connect to software and receiver hardware on the aircraft and an array of GPS sensors, mast-mounted antennas and shipboard equipment.”

Navy Rear Adm. C.J. Jaynes, Raytheon’s JPALS technical executive, recently told Military.com that the delivery of the systems is expected to begin in late 2020, with the installations due to start sometime afterward. The contract is also expected to include the retrofitting of three earlier systems that’d been installed, according to the outlet.

"The US Navy understands how JPALS contributes to their mission success and safety of its people," Matt Gilligan, vice president of Raytheon's Intelligence, Information and Services business, said in a statement.

"Other military services could also benefit from the system's ability to safely land both fixed and rotary-wing aircraft in almost any low-visibility environment."

The landing system has already been in use by the US Marine Corps F-35B Lightning II fighter pilots since 2018, when servicemembers began using the technology to better land on the amphibious assault ship USS Wasp. Citing commentary from pilots, Jaynes told Military.com that the airmen “absolutely love it.”

“It's been 100 percent accuracy, always available, they haven't had any issues at all," Jaynes  said. "We know they have not had to abort any missions due to weather or due to sea state."

Work related to the new project is expected to be completed in August 2023.

Raytheon is also presently working on the development of an expeditionary version of JPALS, which the company states “brings the same precision capability from sea to shore.” The new system is said to fit into five transit cases, be transportable via the Hercules C-130 aircraft and can be fully operational “in under 90 minutes.”

Rise And Shine: US Residents Receive Unwelcome 8 A.M. Wake-Up Call From US Navy