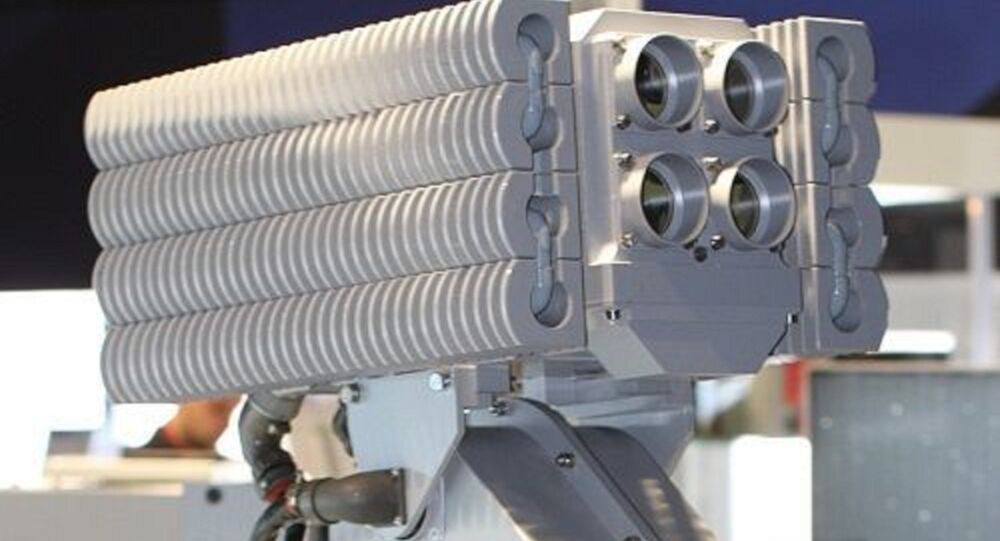 Last week, footage of the Filin's testing by the Russian Navy sparked a renewed explosion of interest in the system from Western media, with the press characterising it a Russian "weapon of mass disorientation" or a "vomit-inducing weapon" following reports from a week earlier that a Russian warship fitted with the mysterious system had passed through the English Channel while being shadowed by the Royal Navy.

The Filin (Russian for 'Eagle-owl') station is designed to suppress enemy optical systems in conditions of low light, at dusk, dawn, and during nighttime hours. The system flashes a powerful beam of light, temporarily impairing the enemy equipment operators' vision, inducing nausea and causing a general sense of disorientation. The Filin has an estimated effective range of up to 5 km, and is designed for use by the navy, army and, potentially, law enforcement and national guard units.

© CC BY-SA 4.0 / Ministry of Defence of the Russian Federation
WATCH Russian Ship Test Weapon That Renders Enemy Targeting Systems Useless
Speaking to Sputnik, a representative from Russia's Roselectronics holding company revealed that engineers from the Integral Experimental Plant in St. Petersburg are actually developing new modifications of the Filin optical interference station and upgrading the range of the existing system.

"Integral Experimental Plant is creating new modifications in the field of visual-optical interference stations on the basis of existing technological solutions, such as the Filin. These feature improved weight and size characteristics and lower power consumption," the representative said.

The Roselectronics official specified that that developers are already on the verge of completing a version of the existing Filin station with a varifocal lens, which would increase its power and range by 50 percent, and expand its impact angle from 10-15 to 30 degrees.

The official also boasted that Filin's modular architecture allows the system to be converted for a broad range of uses depending on user requirements.

"For example, by increasing or decreasing the number of emitters in a single system, and combining components with a lower or greater power output, it's possible to create both strong stations for military and special purpose use and weaker ones for the civilian market, including use by large companies for security or for guarded facilities," the representative noted.

© CC0
Pentagon Hopes to Test Neutral Particle-Beam Weapon in Next Six Months
Earlier, Vladimir Zharov, quality assurance manager at the Integral Experimental Plant, told Russia's Zvezda television channel that Filin has no direct competitors in the world. "Factually, all foreign analogues use laser-based emitters, which essentially burn out the enemy's eyes. Our system does not result in a permanent loss of vision, but reduces firing effectiveness by 300-500%," Zharov explained.

Roselectronics announced the start of deployment of the Filin system aboard Russian Navy vessels last month, with the Admiral Gorshkov and Admiral Kasatonov frigates fitted with two systems apiece, and at least two more Gorshkov-class frigates to be equipped with them in the near future.

Late last year, Rostec announced that a prototype ground-based version of the Filin was being developed, noting that it would create a "significant tactical advantage" to special forces units, including those engaged in anti-terrorist operations.

"Filin is not so much a weapon as it is a system of protection against weapons. I think the difference is obvious," the retired officer explained. "The system interferes with the enemy rifleman or gunner's ability to aim correctly, to the extent that it may cause some hallucinatory symptoms. Our adversaries did not come up with a similar system, but depend on lasers for this purpose instead. The laser emits a rather powerful beam of light, and can damage both optics and a gunner's sight. Filin, meanwhile, does not blind the adversary," Timoshenko stressed.