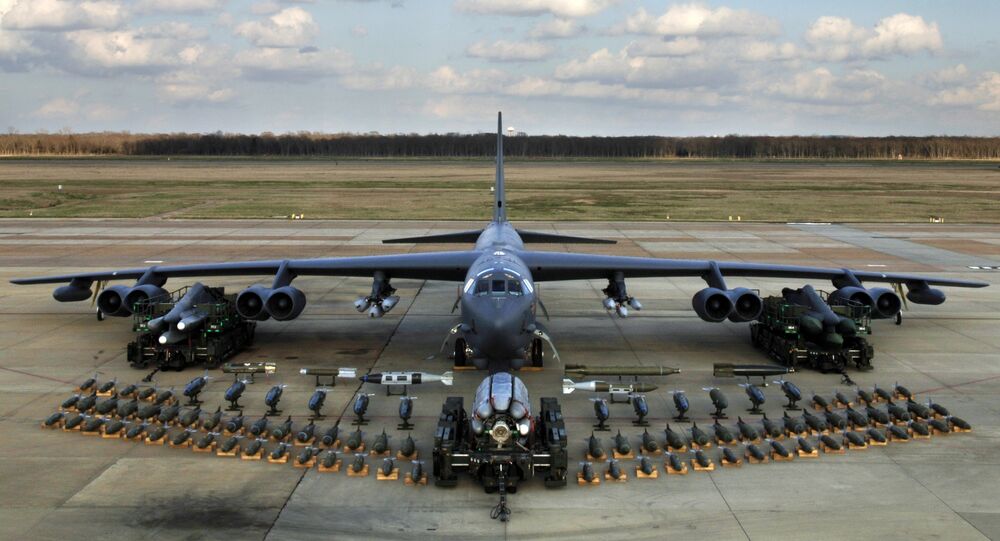 The US Air Force is upgrading the smart weapons capacity of its B-52 heavy bomber fleet. The new and improved Conventional Rotary Launchers (CRLs) will dramatically increase the heavy bomber’s ability to quickly engage targets.

By any measure, the Air Force's B-52 Stratofortress fleet is ancient. The last of its 76 B-52 bombers was delivered by Boeing in 1962, and the Air Force has made wave after wave of upgrades to keep the planes both flying and up-to-date with the latest hardware. They are by far its largest bomber aircraft, capable of hauling an astounding 70,000 pounds of weapons, and the only US plane that can carry missiles with nuclear warheads.

The CRL sits in the aircraft's bomb bay, looking like the cylinder of a revolver pistol and serving much the same function: it rotates to ready the next smart weapon to be fired out of the internal bomb bay. This video shows the equipment being loaded into a Rockwell B1B Lancer, a more modern piece of the Air Force's bomber fleet.

First installed in 2017, the CRL enabled the hulking B-52s to carry smart weapons inside its internal bomb bay instead of under the wings of the aircraft and increased the B-52's smart weapons capacity by 67 percent, Sputnik reported. However, it could only deploy four smart munitions at a time; any more and the plane's circuit breakers might overload, Business Insider noted. After all, the plane wasn't designed for modern munitions, having been built in the 1950s to carry either a couple of big dumb nuclear bombs or a whole bunch of little dumb conventional bombs, to be dropped over the target area the old-fashioned way.

This new upgrade will end that limitation by providing power to all of the internal smart munitions at once, which are guided to their targets by computers instead of simply dumped overhead.

© Sputnik / David B. Gleason
New US Nuclear Posture Could Have 'Apocalyptic Consequences' - Expert

"Now, a B-52 going into a war zone has the ability to put 20 munitions on a target area very quickly," said Senior Master Sgt. Michael Pierce, 307th Maintenance Squadron aircraft armament superintendent, according to the Lompoc Record. "Before, they would have to drop some of their munitions, power up the CRL again and then make another pass."

Business Insider notes that Pierce was speaking about the Air Force's AGM-158 Joint Air-to-Surface Standoff Missile (JASSM) cruise missiles, a smart weapon the B-52 gained the ability to carry only last March, Sputnik reported. The B-52 can carry a larger quantity of smaller weapons.

The Pentagon is also moving forward on its Long-Range Standoff Weapon (LRSO), a nuclear missile under development since 2015 that the Air Force believes is the primary reason to keep the aging B-52s around.

Without the LRSO, "you don't have the B-52 as a viable platform," Gen. John Hyten, commander of US Strategic Command, told a September 2017 forum at the Hudson Institute in Washington, Sputnik reported. The LRSO is expected to replace the aging air-launched cruise missile (ALCM), which Hyten characterized as "ancient," "difficult to maintain" and "almost impossible to fly."

It's unclear whether the LRSO will take advantage of the CRLs when ready for deployment.

The Government Accountability Office reported in 2018 that between 2011 and 2016, the B-52 fleet cost the Air Force about $1.2 billion annually.