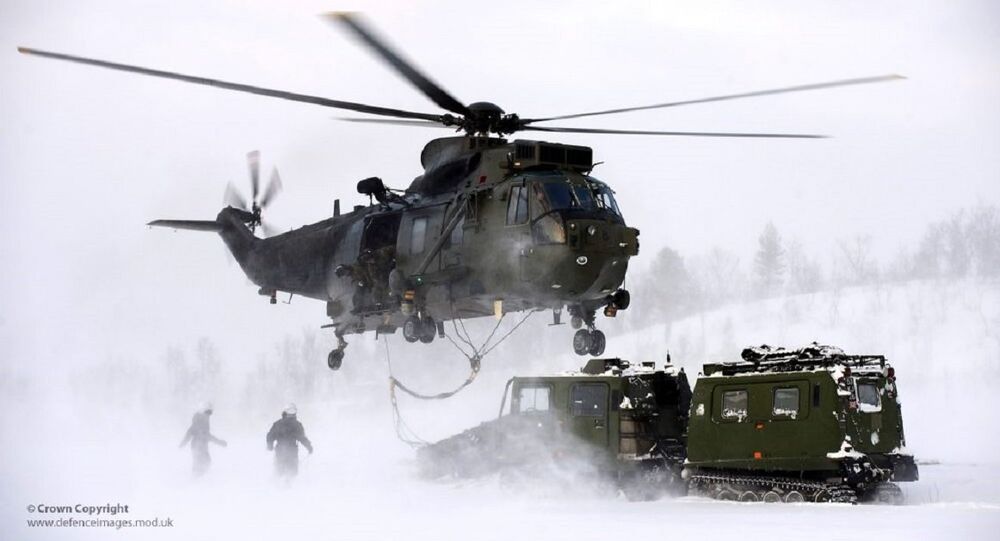 MOSCOW (Sputnik) - UK Defence Secretary Gavin Williamson announced on Sunday the increase in the country's military presence in the Arctic to counter Russia's activities in the region.

"Whether it’s sharpening our skills in sub-zero conditions, learning from longstanding allies like Norway or monitoring submarine threats with our Poseidon aircraft, we will stay vigilant to new challenges", Williamson said, cited by The Telegraph newspaper, adding that the new P8 Poseidon maritime patrol aircraft would be used to constraint activities of Russian submarines in the region.

Williamson made his statement during a visit to a new base of Royal Marines in the area of Bardufoss in northern Norway.

The Royal Marines will also be deploying over 1,000 troops to Norway annually over the 10-year period for training within an agreement between the two states, he added. Nine P8 Poseidon planes will be deployed to the Royal Air Force Lossiemouth airbase in Scotland in 2020 to conduct reconnaissance in the North Atlantic and in the Arctic.

© CC0
WATCH Massive Polar Bears' INVASION in Russia's Arctic Archipelago
Williamson has repeatedly expressed concerns over alleged Russia's increasing military presence in the Arctic and attempts to militarize the region. London also earlier claimed that navigation in the Arctic could be limited as a result of Moscow's alleged actions.

Russian Foreign Minister Sergey Lavrov said Saturday that Moscow notes the Alliance's military build-up in the Arctic and wants to figure out what mandate the alliance is seeking to get in the region.

"We note the increased activities by NATO members. We discussed this with our Norwegian neighbors. We want to understand what kind of mandate NATO is going to have in the Arctic", Lavrov said Saturday at the Munich Security Conference.

In August, Russian Ambassador at Large and Senior Arctic Official Vladimir Barbin pointed to NATO’s ongoing military build-up in the region, citing its Trident Juncture 18 drills, the alliance’s decision to set up the new Joint Force Command for the Atlantic based in the US city of Norfolk which would be in charge of the Arctic-Atlantic zone and Washington’s efforts to re-establish its Second Fleet, mainly operating in Northern Atlantic.

© AP Photo / David Goldman
Researcher: Arctic Domain is Shrinking in Response to Global Warming
Meanwhile, Russia has proposed many constructive projects in the Arctic Council — an intergovernmental cooperation forum for Arctic states — and other relevant structures on cooperation in the region, Lavrov said Saturday. "We don’t believe that the Arctic cooperation requires any military dimension, and I hope this will be the case with our partners as well", Russian Foreign Minister stressed.

The Arctic Council is an intergovernmental forum for Arctic States to cooperate on issues like protecting indigenous communities, sustainable development, and environmental protection. According to the 1996 Ottawa Declaration, the members of the Arctic Council include Canada, Denmark, Finland, Iceland, Norway, Russia, Sweden, and the United States. Finland held the chairmanship since 2017 and Iceland will head the council from 2019 to 2021.

Moscow has repeatedly stressed that it considers the Arctic to be an area for constructive dialogue and equal, conflict-free cooperation in the interests of all nations.