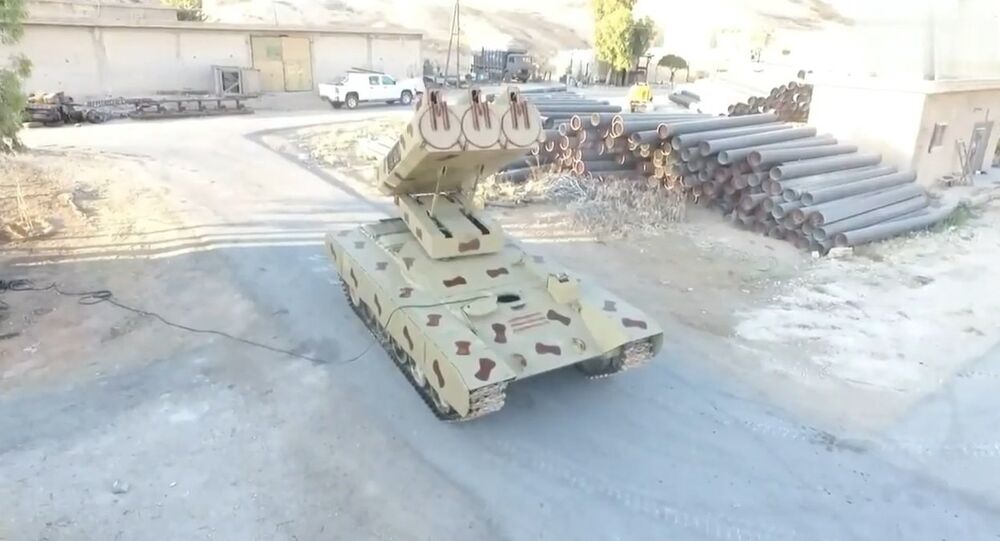 Built on a T-72 tank chassis, the new rocket system has already been put into service with the Syrian Army's 4th Armored Division and participated in its counterterrorism operations throughout the country.

Presumably called the Golan-1000 out of reference to the Israeli-occupied Golan Heights, the new rocket system carries three massive 500 mm rounds, each packed with 500 kg of high-explosive fragmentation ammunition.

As the video showing off the system demonstrates, the vehicle's launch system is operated remotely using a simple control pad.

Other verified information about the system is scarce, but the Golan-1000 is presumed to be a short-range launcher meant to defeat enemy fortifications, vehicles and manpower. The vehicle has already been dubbed an "improvised TOS-1" or "rocket monster" by some observers.

The heavy self-propelled artillery system is believed to have already been used against militants in the southern outskirts of Damascus. A video published by Ruptly in late April was said to feature the Golan-1000 firing off rounds into Hajar al-Aswad district, south of Damascus, where Daesh* forces were holed up.

© AFP 2020 / AMER ALMOHIBANY
Syrian Army is One of the Strongest Forces in Middle East, Will Retaliate Against Israel – Iranian Official
The 4th Armored Division, also known as the Syrian military's "armored special forces" has engaged in over a dozen battles across the country over the course of its seven-year foreign-backed civil war. The unit participated in the siege of Daraa, the battle of Aleppo, the defense of Damascus, and the battle of Harasta.

The Golan Heights are a 1,800 square km strip of Syrian territory occupied by Israel during the 1967 Six-Day War and annexed in 1981. The UN Security Council condemned the annexation of the region and called the decision to impose Israeli "laws, jurisdiction and administration" over the territory "null and void and without international legal effect." In 2016, Israeli Prime Minister Benjamin Netanyahu vowed that Israel would never return the Golan Heights to Syria.