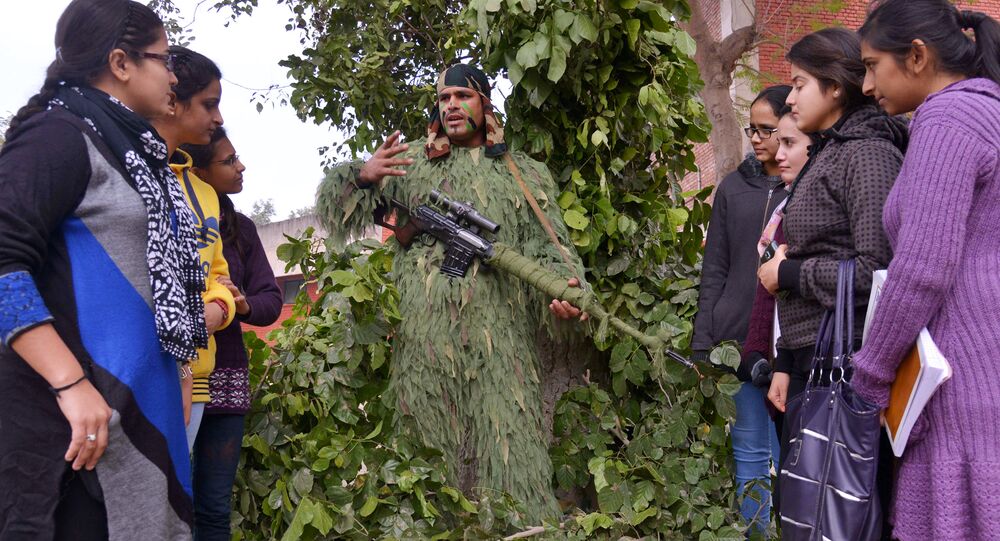 In order to minimize casualties during cross-border firings, the Indian Army, of late, has been equipping its weapons' systems with long-range sight vision that can detect targets at a distance of at least 1,300 meters.

NEW DELHI (Sputnik) — In a bid to enhance the night capability of its infantry deployed along the border, the Indian Army has floated a requirement for 5,500 long-range night sights for sniper rifles which can detect enemy from a minimum distance of 1,300 meter,. Since most modern rifles and tanks now have night fighting capability, swift movement of mechanized forces is now possible during the night as well.

The sight should have suitable reticle pattern that enables aiming up to 1,200 meters in order to facilitate the night firing of 8.6mm (0.338 inches) sniper. This is very critical in the backdrop of persistent cross-border violation along the western border which takes a heavy toll of the Indian troops.

"The Indian Army seeks uncooled thermal imaging night sight with the latest technology parameters in order to help the soldier to fire the 8.6mm sniper rifle accurately. The sight should be able to fit on MIL STD 1913 compliant Picatinny rail," an Indian Army official told Sputnik.

The tender for purchase of approximately 5,500-night sights is expected to be issued in June 2018. In the past, India had imported Thermal Imaging (TI) sights for T 72 tanks from Poland. These are also available in some other countries like France, Israel, Russia, Ukraine and the USA.

Apart from equipping the sniper rifles with long range night sights, sources told Sputnik that the Army is going to issue a tender to purchase 15,000 uncooled thermal imaging sights for its 84 mm Carl Gustaf rocket launcher which is the standard anti-tank weapon sanctioned to each Infantry platoon. The long-range night sights will be able to detect rival tanks and other enemy assets from a minimum distance of 1,200 meter,. The Indian Army will use this to destroy the enemy's armored vehicles, concrete bunkers, landing craft, and aircraft. Presently, the Carl Gustaf cannot fire in the dark if the target area is not illuminated.