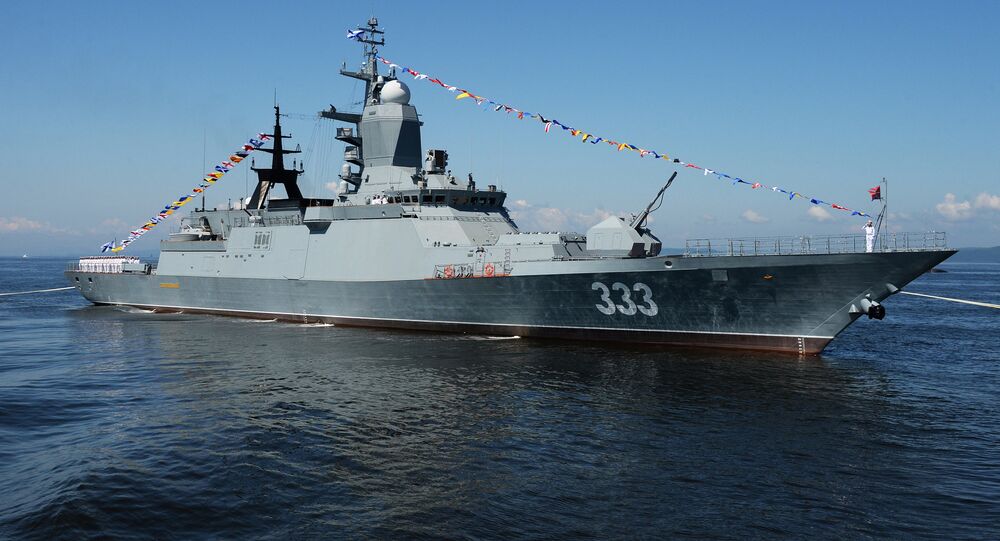 A detachment of Chinese Navy warships arrived in Vladivostok on Monday to take part in the second phase of the Russian-Chinese Joint Sea-2017 naval drills. In a special analysis for Sputnik, Russian military observer Vasily Kashin explained what makes the drills unique as far as Russian-Chinese military cooperation is concerned.

The second phase of Joint Sea-2017 officially kicked off on Monday, and will continue until next Tuesday. The coastal phase of the drills will run until Thursday, and involve joint training by Russian and Chinese naval infantry. The second stage, beginning on September 22, will consist of a maritime stage, and will take place in the Sea of Japan and a southern area of the Sea of Okhotsk.

The Russian Navy ships involved in the drills include the Admiral Tributs, a large Udaloy-class destroyer designed for anti-submarine warfare, as well as the Sovershenny, a Steregushchiy-class corvette which NATO designates as a frigate due to its size. It also includes the Igor Belousov rescue vessel, equipped with an AS-40 deep-submersible rescue apparatus, two diesel subs, a Tarantul-class corvette, and several support ships.

© AFP 2021 / LIU Jin
Trade Between China, Russia Rises by Almost 25% in January-July 2017 – Ambassador
China is represented by the Shijiazhuang destroyer, equipped with Russia's S-300FM shipboard anti-air missile system, the Daqing frigate, and the Changdao submarine support ship, which has its own deep-submersible rescue vehicle, the Elar-7.

Commenting on the drills, Kashin explained that they are significant thanks to their special focus on anti-submarine warfare. According to the observer, this is important because while previous Joint Sea drills paid significant focus on amphibious landing operations, these are absent altogether this time.

"The naval infantry units will conduct joint training on the shore. But amphibious landings are not included among the elements of this year's program," Kashin said.

"Instead," the analyst noted, "for the first time, Russian and Chinese submarine rescue vessels equipped with deep-sea rescue vehicles have been included in the joint maneuvers. Russian anti-submarine airplanes, and Russian and Chinese anti-submarine helicopters will also participate in the drills. Two submarines from the Russian Pacific Fleet are involved in the training. It's likely that their role will be to be found and 'rescued' by the Russian-Chinese joint task force."

© AFP 2021 / WANG Zhao
US Threats to Stop Trade With China Over North Korea Nothing But 'Blackmail'
Kashin said that part of the novelty of these drills is that they will aid in the exchange of valuable experience in the organization of rescue operations. "Furthermore, thanks to the working out of cooperation here, new possibilities will be opened up for carrying out actual joint Russian-Chinese missions if a disaster ever befalls a submarine belonging to one of the countries."

Separately, of course, the expanded exchange of experience on issues of anti-submarine warfare will also take, "something that is of particular interest to the Chinese side," the analyst noted.

China and Russia start 2nd stage of their "Joint Sea-2017" naval exercises in the Sea of Japan and the Okhotsk Sea https://t.co/jhVADURVvP pic.twitter.com/maxptiwBnJ

Ultimately, Kashin believes that the growing importance of anti-submarine warfare operations in the programs of joint Russian-Chinese exercises speaks to the growing trust between the two countries in the military sphere, "and the willingness to exchange information on complex issues."