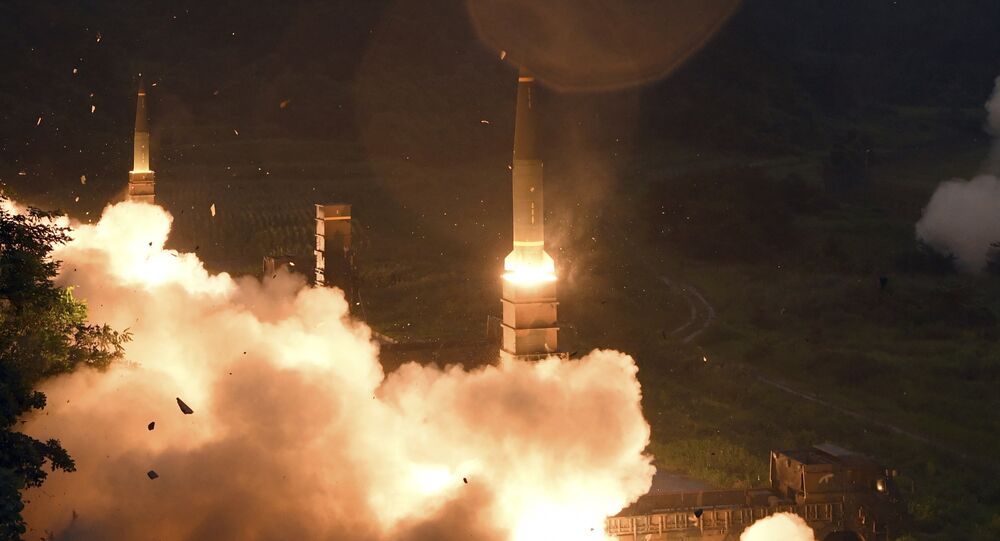 Alexander Degtyarev, the head designer of Ukraine's Yuzhnoye Design Office, denied Tuesday that the company's employees could have taken part in designing engines for Nort Korea's missiles, saying that "someone was able to make some copies somewhere."

MOSCOW (Sputnik) — Some country might have been able to copy the designs of missile engines developed by Ukraine's Yuzhnoye State Design Office, but nobody among its staff helped North Korea acquire such engines, Degtyarev said Tuesday, following reports that Pyongyang's success in ballistic missiles tests might be linked to Yuzhnoe rocket engines.

© Sputnik / Ilya Pitalev
Report on Ukraine Military Supplies to DPRK 'Does Not Suggest Kiev Involvement'
The New York Times newspaper published on Monday an article suggesting that Pyongyang may be using a modified RD-250 high-performance liquid-propellant engine (LPE) for its latest missiles, the kind that used to be developed at Yuzhnoe and Russia’s Energomash company.

"I am certain that none of our colleagues were involved in helping to build an engine for North Korean missiles. But our engines are highly valued and used around the world… Perhaps, someone was able to make some copies somewhere," Degtyarev told Strana.ua outlet.

© Sputnik / Vitaly Belousov
Ukraine Follows North Korean Path in Setting Up Phantom Ministries
Yuzhmash on Monday denied any involvement in North Korea's space or defense-related missile programs. The plant also pointed out that it had produced neither missiles nor missile systems since Ukraine became an independent state after the dissolution of the Soviet Union. It said its only exported serially-produced engine was designed for use in space and was not suitable for ballistic missiles.

Ukrainian National Security and Defense Council Secretary Oleksandr Turchynov also said on Monday that Ukraine defense and aerospace companies did not supply any weapons or military technologies to North Korea.

The IISS study did not claim that Yuzhnoe leadership or the Ukrainian government were directly involved in any such acquisition. However, it suggested that workers at the company's facilities in Ukraine's Dnipropetrovsk and Pavlograd, feeling the brunt of economic crisis, might be "susceptible to exploitation by unscrupulous traders, arms dealers and transnational criminals operating in Russia, Ukraine and elsewhere."

Tensions around Pyongyang's missile program have flared up in the recent weeks, following the adoption of the UN Security Council sanctions, which led to North Korea trading threats and warnings with the United States. Most notably, Pyongyang said it might consider an attack on the area near the US territory of Guam in the Western Pacific.