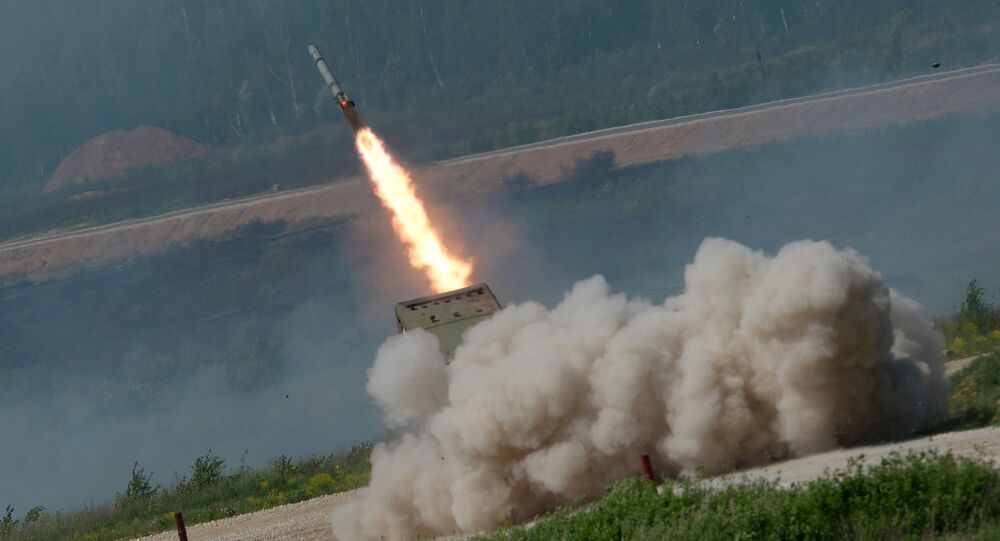 A brand-new heavy flame-throwing system will enter service with the Russian Armed Forces in the next few years.

© Sputnik / Alexey Malgavko
Russia's TOS-1 Flame Thrower is Second to None in the World
The Russian Armed Forces is due to get the advanced heavy flame-throwing system Tosochka which will replace the TOS-1A Solntsepyok (Sunheat) heavy flamethrower currently in service.

RIA Novosti quoted Nikolai Makarovets, chief designer of the Russian research and production association Splav, as saying that the Tosochka heavy flamethrower will be delivered in line with Russia's state armaments program for 2018-2025. Splav is dealing with the development of the Tosochka systems.

"This is the development of the Solntsepyok project and unlike Solntsepyok, the new system will be equipped with a wheeled chassis. Experience of operating heavy flamethrowers in desert areas has indicated wheeled chassis are the best option," Makarovets during the ongoing MAKS-2017 airshow.

In an interview with Sputnik, Russian military expert Viktor Murakhovsky specifically focused on characteristics of the Tosochka system.

Referring to Solntsepyok, he recalled that "the heavy flame-throwing system was first mounted on the chassis of the T-72 battle tank and then – on the T-90 tank's chassis."

"The main elements of the TOS system include a transport launch canister which contains an unguided rocket equipped with a warhead with a flamethrower-incendiary mixture. There is another option, with a thermobaric warhead which is related to the so-called vacuum ammunition," Murakhovsky said.

He added that "the next stage of the development of this system stipulates increasing the range of fire and equipping the system with corrected projectiles which hit the target more accurately and effectively."

According to him, the Tosochka flame-throwing system can be mounted on the sophisticated Armata tracked vehicle platform.

"Also on the table is the option that one of the vehicles of the Armata family — a new generation of Russian armored vehicles — will also be used as a chassis for the new heavy flame-throwing system," Murakhovsky said.

He noted that the heavy flame-throwing systems are widely used in the fight against terrorists.

"For example, the Iraqi Armed Forces used them during the liberation of Mosul, and these systems were also seen in Syria," Murakhovsky concluded.

The TOS-1A Solntsepyok, in turn, is an upgraded version of the TOS-1 Buratino heavy flame-throwing system which underwent its first combat tests in Afghanistan in 1988-1989.

Host photo agency
Russia MoD to Receive Three Armata-Platform Combat Vehicles in 2017
In his article for the National Interest last year, defense analyst Sebastien Roblin described the TOS-1 as one of "the most devastating explosive weapons short of tactical nuclear weapons."

The current effective firing range of the TOS-1A system is about six kilometers. The new shell is expected to increase the new Tosochka flame-throwing system's range to ten kilometers, that is, by 40 percent. The improved range is expected to be achieved in part via a new fuel/explosive mixture inside the shell.