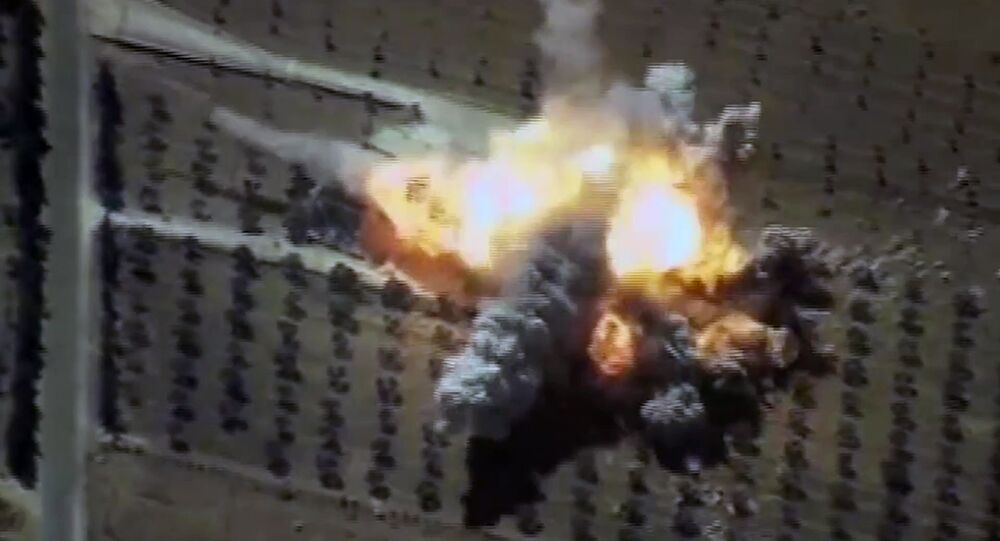 The Russian Navy is expected to hold a series of drills off the coast of Syria beginning Friday and lasting until the end of the month. Speaking to Sputnik, military observer Vladislav Shurygin noted that Russia's military has demonstrated a level of combat readiness in Syria which Russia's NATO counterparts have yet to get used to.

The Russian Navy plans to start missile drills, and may carry out strikes against terrorist targets in Syria from the Mediterranean Sea off the country's coast, according to media reports citing a Notice to Airmen (NOTAM) bulletin and navigational warnings to mariners. The Ministry of Defense has yet to make an official comment on the imminent exercises.

Respected Russian military expert Igor Korotchenko said that the drills are expected to be accompanied by the latest Russian warships, making a variety of exercises and combat launch operations possible. "We're talking about launches from ship-based anti-aircraft missile systems, and about the use of strike missile systems," he noted. The expert added that he could not rule out the combat use of Kalibr cruise missiles during the drills.

The drills, which are expected to take place July 14, 19, 21, 26 and 28, will be conducted between 8 am and 6 pm during these days. The exercises follow on similar operations which took place between May 29 to June 4 and June 18 to 30. Last month, the Russian Navy frigates Admiral Essen and Admiral Grigorovich, along with the Krasnodar diesel-electric attack sub, attacked terrorist targets inside Syria using Kalibr cruise missiles, striking command posts and ammunition depots in Hama province.

Speaking to Radio Sputnik about the nature of the new drills, veteran military observer Vladislav Shurigin explained that they were planned long in advance.

© Photo : Almaz Central Marine Design Bureau
Kalibr Missiles and 'Invisible' Cannon: What is Known About Russia's Newest Corvette
"These are planned exercises, registered a year in advance; there are no force majeure circumstances here, no problems," the expert noted. "The fleet is learning, executing its objectives."

At the same time, Shurigin admitted that these drills, like all major Russian Navy drills, include an element of exhibition, serving as a demonstration of Russian military power. "This is also a demonstration of the flag – showing our ability to work in a fairly remote region…Naturally, if exercises go well, if top-notch training is shown off, if all targets are destroyed, then everybody, including the intelligence services of other countries, makes a note for themselves that the Russian Navy is in good fighting form."

Focusing on the latter point, Shurigin stressed that Russia has had some major successes in the course of its military operation in Syria, something which the country's US and NATO adversaries couldn't help but take note of.

© REUTERS / Sana
Syria's President Bashar al-Assad visits a Russian air base at Hmeymim, in western Syria in this handout picture posted on SANA on June 27, 2017, Syria.

"Recently, the level of combat readiness among both pilots and sailors has grown very considerably. We see this from the results of the military operation in Syria. We have surprised the whole world. In particular, carrying out nearly a [two] year operation and having conducted over 10,000 sorties, we did not lose a single aircraft due to technical reasons or by the mistake of the crew. For NATO, this was in some ways a shock – they did not expect this. Our warships fired at the terrorists from the Caspian Sea, and fired from the Mediterranean Sea. All this took place without any disruptions, and all targets were destroyed."

© AFP 2021 / DELIL SOULEIMAN
What Derails Planned 'US-Israeli Military Operation' in Syria
For his part, military expert and retired Navy captain first rank Mikhail Nenashev suggested that Russia's announcement of its intentions was a kind of lesson on etiquette to the other countries operating in and around Syria.

"In its war against the 'terrorist internationale' in Syria, the Russian Navy and the Aerospace Defense Forces are acting predictably, taking account of the possible consequences for all ships and aircraft that may be in that section of the Mediterranean Sea" (where the missile launches are being carried out).

Russia, Nenashev noted, has consciously chosen to give regional actors advance notice, unlike many other partners in the fight against terrorism, which have used flimsy pretexts to launch Tomahawks in the past. "I'm talking here the well-known attacks by the US Navy against Syria," the analyst clarified.

According to the retired officer, the global war against terrorism requires assertive, consistent interaction and cooperation. "With its warnings and alerts, Russia is inviting all healthy forces on the planet to join in the real war against terror in Syria and Iraq."

Finally, Nenashev suggested that the expected missile drills could be seen as an indication that the Russian military, together with its Syrian partners, is ready and willing to wrap up the anti-terrorist operation "with the total destruction of the Daesh (ISIL/ISIS) terrorists."

Why Russia, US Could Still Cooperate in 'Untangling the Syrian Knot'